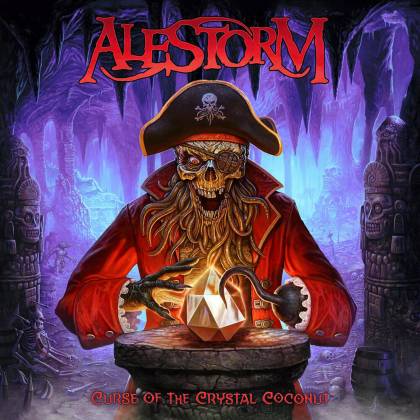 Curse of the Crystal Coconut

ALESTORM's lyrical focus on pirates, battles at sea, lusty and busty sea wenches, and general drunken revelry theoretically should not have the endurance that it has shown to have. When the Scottish party-metallers burst onto the scene with 2008's "Captain Morgan's Revenge", the insertion of those themes into songs powered by sing-along choruses, power metal glory, and cheesy '80s keyboards made for one of the most infectious records of the era. One could not imagine that over a decade later, the group would keep finding new ways to spin their musical tales of nautical conquest. The group does not step too far outside of their comfort zone on their latest record, "Curse of the Crystal Coconut". The record is simply another indicator that the secret behind the band's longevity is their stellar knack for never letting the overall themes drown out the catchiness of their song-craft.

The ship sets sail with "Treasure Chest Party Quest", continuing the group's tradition of launching their records with catchy party riffs, ear-pleasing keyboard solos, and the band's mission of sailing in search of beer, treasure and parties. Vocalist/keytarist Christopher Bowes leads the chorus with pirate-voiced battle cries, shouting that "We're only here to have fun" in perhaps the most blatant statement of intentions ever voiced by the band. At this stage of their career, ALESTORM can very likely write such headbanging party anthems in their drunken sleep. Guitar riffs from Mate Bodor have plenty of bite in the appropriately titled ode to an ornery crocodile, "Chomp Chomp". "Pirate's Scorn" is a jaunty gallop that may be the record's best integration of sea-shanty song structures, bolstered by an engaging instrumental duel between Bodor's guitar, Bowes's keyboards and second keyboardist Elliot Vernon. The track is also strengthened by an equally infectious violin performance from Ally Storch (SUBWAY TO SALLY),who contributes a great performance throughout the rest of the record as well.

The group's deviations from that winning formula have typically been executed with mixed results, and that is certainly evident here as well. "Tortuga", featuring a guest appearance from Captain Yarrface of fellow pirate-metallers RUMAHOY, is a bit of a misfire, integrating a down-tuned guitar crunch and a few vocal passages that border on disjointed rap-metal. The band's divergence from their standard path plays out much better on "Zombies Ate My Pirate Ship", as a layer of orchestral power-metal lurks underneath the group's riffs and battle cries, and a gorgeous vocal cameo from German folk/pop artist Patty Gurdy enhances that aura. "Wooden Leg Pt.2 (The Woodening)" uses the short-burst thrash of "Wooden Leg!" from 2014's "Sunset on the Golden Age" as a launching point, expanding it into an eight-minute epic that begins with ALESTORM's version of an "Imperial March" and is followed by a bombastic blitz, glorious guitar solos, and a fleshed-out story that is honestly probably more effort than such a song deserves, but the band proves adept at keeping the fun coming and not letting the proceedings drown under its weight.

More than a decade into their existence, ALESTORM proves that there are still plenty of waters and islands worth exploring and singing about with "Curse of the Crystal Coconut", and there are likely more bountiful journeys to come should they continue to set sail.