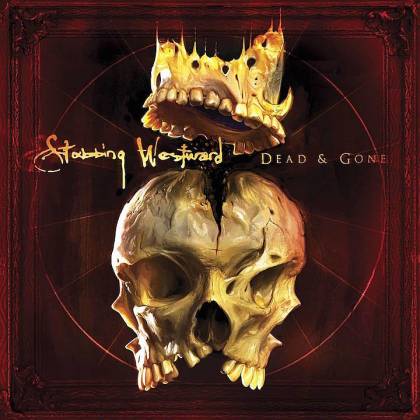 Illinois's STABBING WESTWARD was a mainstay on terrestrial rock radio at the turn of the century due to memorable hits like "Save Yourself". The industrial rockers were off everyone's radar for years before reuniting in 2016 for shows and tours. That period of rebirth has led to their first batch of newly recorded material in nearly two decades in the form of the recently released EP, "Dead and Gone", which follows last year's re-release of their 1992 "Iwo Jesus" EP. Fortunately for longtime fans, and in spite of its brevity, the EP serves to remind listeners why they are regarded as one of the catchiest industrial rock outfits of the last quarter century.

The band formed in the Midwest in 1986 before eventually migrating to the city of angels years later, and they were prolific primarily through the nineties prior to disbanding in 2002. Since the ensemble's reboot in 2016, founding members Christopher Hall (vocals/multi-instrumentalist) and Walter Flakus (keyboardist) have moved forward with a new rhythm section in the form of drummer Bobby Amaro (ex-ORGY) and bassist Carlton Bost (DEADSY/ORGY) through to their long-awaited, brand new offering. "Dead and Gone" is a collection of three new tracks accompanied by two remixes of those songs. The EP is short and sweet, but it offers enough to tide over longtime fans until their next full-length release.

The title track is driven by an enveloping synth drive that meshes perfectly with Hall's emotive lyrical and vocal outpouring. The track's thematic sense of struggle is mirrored appropriately with the musical energy that travels through peaks and valleys. The "Dead and Gone (Stoneburner Remix)" reinterpretation steers clear of the source material's more aggressive tendencies, but maintains enough of the ebb and flow qualities to keep it interesting, however, it's far from exceptional.

An unmistakable Middle Eastern quality underlies "Cold"'s synths in a seductive manner that's captivating and memorable. The song's contextual references to romantic love that has morphed into unrequited love, where the object of one's desire has become ice cold is powerfully conveyed and interestingly captured within the form of a pop song crafted by an industrial rock band. The partnering remix track propels an equal degree of groove, yet it proves to be just as unremarkable as the EP's other remix track. Rounding out the EP, "Crawl" builds momentum with simplicity toward a provocative, massive, dense sound mass. Yet again, romantic love establishes itself as the release's motif, cemented with Hall's signature vocal stylings and passionate delivery.

The "Dead and Gone" EP ultimately proves how memorable STABBING WESTWARD's industrial rock can be, and it serves as a teaser for a looming full-length album that many are anticipating. STABBING WESTWARD may not sound as fresh and new as they did in the nineties, but they sound just as passionate and exciting as ever.