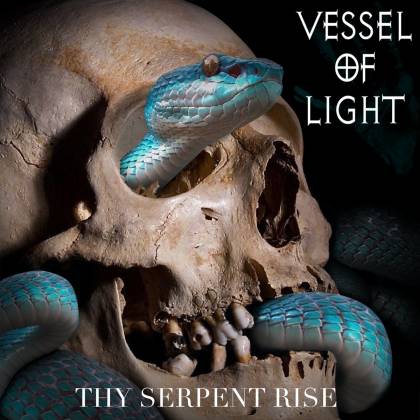 There are times in life, particularly when the world appears to be circling the cosmic plughole, that only a large, jolting dose of massive riffs and Satan will do. VESSEL OF LIGHT peddle a gloriously gritty and filth-ridden strain of oh-so-New-Jersey doom that exhibits a laudable disregard for straying from the left-hand path. If you like BLACK SABBATH and hate the world, "Thy Serpent Rise" already has your card marked. Band mastermind and guitarist Dan Lorenzo is one of those players with a seemingly direct neurological connection to the Iommian mothership: it's obvious from the tsunami of irresistible riffs that is "Abandon Life" that this is both more of the same winning formula that made 2018's "Woodshed" album such a riotous cult hit and a huge step up in confidence and muscle. Liberated from the artful rituals of ANCIENT VVISDOM, vocalist Nathan Opposition sounds reborn as some infernal blues druid, with an authoritative rasp that makes these nefarious and often sexually charged lyrics bristle with believability. He deserves particular credit for singing the chorus to, erm, "Meet and Bone" with a straight face. Fortunately, the riffs underpinning the whole thing are unquestionably as serious as Hell.

Elsewhere, VESSEL OF LIGHT deliver plenty of malevolent money shots, from the crippling, Southern fried slurry of "Rush of Blood" to the swaggering, priapic shuffle of "Save My Soul". The latter, in particular, swings like a megalodon's man-bag and delivers such a rush of Sabbathian goodness that you may find yourself laughing out loud. It's all delivered with a scowl and a sneer, of course, and Lorenzo's riffs are so consistently strong that any slight hints of goofiness vanish in a boozy, THC-soiled and fervently unholy haze.

And if that all sounds like too much fun for a doom record, the utterly crushing "Decomposing Mental Health" will whip the emotional rug from underneath your feet. Arguably the most powerful moment here, it's a somnambulant slither through anguished cerebral wastes, Lorenzo's riff-machine set to eviscerate and Nathan Opposition, possessed and assailed, growling his dismay. Put simply, it's heavy as shit.

Substantial nourishment for fans of heavy metal's slow-motion essence, VESSEL OF LIGHT have unleashed a serpent with the sharpest of teeth. Once bitten, infernally smitten.