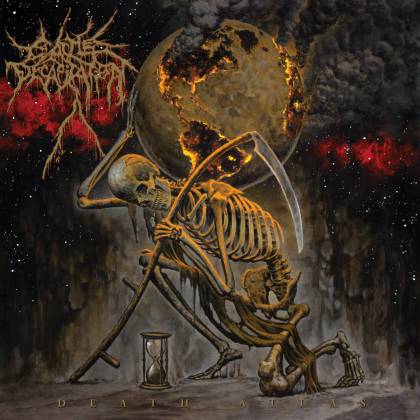 If there's one thing that separates the truly great from the rest, it's vision. CATTLE DECAPITATION have long stood out as one of extreme metal's most fervently creative and intelligent bands. As far back as 2004's "Humanure", Travis Ryan's maverick deathgrind crew were messing with formerly revered formulae, forever willing to veer off in weird directions in order to maximize the impact of every riff, blast and growl. By the time the San Diego band arrived at 2015's "The Anthropocene Extinction" it was obvious that Ryan was operating in a class of precisely one. An epic, diverse and densely layered re-imagining of feral, brutish death metal, it embraced melody without a hint of compromise, while also somehow being more extreme and terrifying than anything the band had released before. Not that death metal lacks visionaries, of course, but as they prove again on "Death Atlas", CATTLE DECAPITATION's musical world is unique and almost comically impressive, as Ryan further explores the outer reaches of his vocal arsenal over some of the most heroically bombastic, intricate and memorable extreme metal you will hear in this or any other year.

As utterly disgusted with humanity as ever, "Death Atlas" pitches Ryan as commentator, watching the world disintegrate before his eyes. "Fuck the future!" he rages during opener "The Geocide", and it's both thrillingly bleak and refreshing to hear such authentic, righteous fury on an extreme metal record, rather than the wild, oblique metaphors and cliched war and horror tropes that inform the majority of releases. The hideous reality of mankind's blithe stumble toward self-destruction hangs heavy over everything here, and yet there is an insane amount of urgency, energy, excitement and creative fervor on display too. Dancing and screaming amid the ruins, CATTLE DECAPITATION have never sounded more vital. And they have written several of their finest ever songs this time around, too. Preview single "One Day Closer to the End of the World" is a certified jaw-smasher, all ripping blasts and hissing, gelatinous contempt. Likewise, "Bring Back the Plague" is an excoriating storm of tech-death muscularity, while both "Be Still Our Bleeding Hearts" and "With All Disrespect" hurl warped but incisive refrains into the mix, providing jarring but inspired contrast with the songs' demented levels of speed, venom and choking, claustrophobic heaviness. Best and most mind-bending of the lot, the closing title track is so monumentally epic and crushing that it's hard to fathom where its creators could possibly take their sound next. Either way, it's all stupidly exciting.

In the midst of all this bug-eyed ingenuity and vicious chaos, Travis Ryan remains a commanding and hypnotic presence. His newly re-tooled vocal armory now includes a genuinely unsettling melodic screech that brings skewed hookiness and a subtle hint of theatricality to this already hugely ambitious but also oddly coherent show of artistic strength. As the world circles the plughole, "Death Atlas" will remind you exactly why extreme metal gives so many of us a reason to keep forging ahead. It's an instant classic, an invigorating dose of untethered musical madness and one of the most essential metal albums of 2019. But we're all still fucked. Sorry about that.