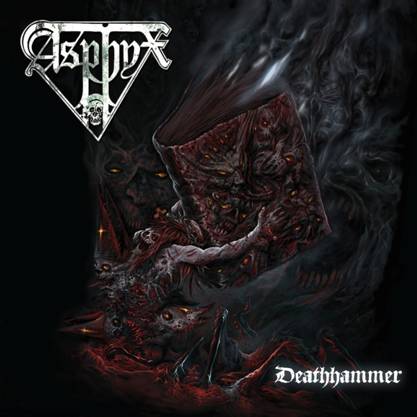 If you thought ASPHYX was just going through the motions with "Death…The Brutal Way" then you didn't listen to the album; it's as simple as that. Any remaining doubts should be tarred, feathered, and immolated with new album "Deathhammer", about as definitive as ASPHYX gets. Could the Doomed Dutch of Death Metal have come up with a better title? Impossible. ASPHYX brings down the hammer with belligerence and spite on those who believe that death metal has nothing to do with actual songs and everything to do with BPMs and overindulgent technicality.

There's no waiting around for the blows either. The album is launched with a smothering riff and a freight train rhythm on "Into the Timewastes", as the shredded growl of Martin van Drunen announces with absolute malicious intent that ASPHYX ain't fuckin' around. The band varies tempos with effectiveness as well as they've ever done on "Deathhammer", while every riff is made to count. In addition to "Into the Timewastes", the speedier material includes "Of Days when Blades Turned Blunt", with its forceful gallop and a hellacious riff, a blistering call-to-arms ("This is true death metal, you bastards!") title track that incinerates in two-and-a-half minutes, and a couple of other quick burners in "Reign of the Brute" and "Vespa Crabo". Though "The Flood" crunches along in mid-tempo form with all the menace one would expect, it is on the doom crawls and misery marches of "Der Landser", "As the Magma Mammoth Rises", the aptly titled "We Doom You to Death", and one of the most tormented and ungodly tracks the band has ever recorded in "Minefield". With an average running time of around seven minutes and only the slightest of pace variations, the fearsome quartet of tunes is an unmistakable representation of ASPHYX at their doom/death best. They may not have been the first to dip their death in doom, but no band has ever crushed it quite like ASPHYX nor been able to emulate the sound with authenticity (HAIL OF BULLETS doesn't count). It's a strain of sickness for which a cure will never be found.

Between throat-scarring wails from Van Drunen that are at once anguished and venomous, a bevy of Paul Baayens riffs that as memorable as they are ridiculously scathing, and a Bob Bagchus / Alwin Zuur rhythm section that pummels and pounds with impunity, "Deathhammer" is indisputable evidence of ASPHYX's proper place among the death metal elite. True death metal it is (you bastards). Accept no imitations.