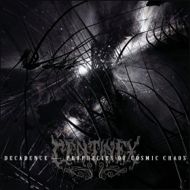 Waiting in the wings to come and steal the thunder when the time is right, CENTINEX are the proverbial dark horses of the Swedish extreme scene. In terms of their period of existence, they've got a few years of sweating and grunting on big lights such as THE HAUNTED, but have only just, with this their seventh album, succumbed to the uncertain allure of something resembling a bigger record label.

Yet they are highly regarded amongst those in the know, and perhaps they may now find themselves rubbing shoulders with the SOILWORKs of this world on cavernous European stages.

The CENTINEX mandate is not to re-invent the steel, as it were, but to put experience to good use by wielding their instruments with unswerving confidence - as they do to good effect on "Deathstar Unmasked" — while attempting to pitch a few discordant quirks our way. Ironically, "Decadence…" goes all AT THE GATES initially with the opening gallop that is "Arrival of The Spectrum Obscure", but then seeing as there's a minimal pocket of time between the forming of both bands, CENTINEX might just poke you sharply in the eye for making such a suggestion. Elsewhere, there are more spiralling, off-kilter riffs than you can take in at once ("Target: Dimension") and stomping mid-paced work on "Cold Deep Supremacy".

Overall, rampaging death-thrash with a degree of class.