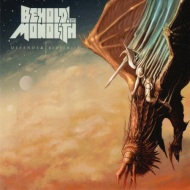 BEHOLD! THE MONOLITH is an inducer of earthquakes. You will feel the earth shift beneath your feet on this sucker. Don't cast aspersions about the "self-released" tag either. New kids, unknowns, or otherwise, "Defender, Redeemist" does more than hold its own against the commercially established and the much hyped; it is a certifiable threat.

So what is "Defender, Redeemist" exactly? It's fucking heavy for one thing, like a musical reincarnation of the Wooly Mammoth. Doomed stoner thrash or stoned thrashing of the doomed, shit, I don't know, but it's all in there. Besides, all that shoehorning means far less than understanding that BEHOLD! THE MONOLITH has written a great bunch of songs here. The tracks benefit from the superior skill of human riff machine Matt Price (who also kills with his solos) and the smoke-billowing locomotive rhythm section of thunder drummer Chase Manhattan and bassist Kevin McDade who also doubles as the one man that can make the vocals of MASTER's Paul Speckmann sound pretty by comparison. "Defender, Redeemist" comes off in general terms like an amalgamation of HIGH ON FIRE, early MASTODON, LAIR OF THE MINOTAUR, and CELTIC FROST that is sprinkled with MOTÖRHEAD pellets and punched in the face by MASTER. That'll work for now; let's move on.

And who better to record and engineer the album than Billy Anderson? Forged in the fires of North Hollywood's Skull 7 Studios, "Defender, Redeemist" begins in doomy fashion, yet in such a graceful way for the one and a half minutes of "Guardian Procession" that the clobbering that follows on the awesomely chunked up stoner thrashing of "Halv King" becomes that much more shocking. It's the first of numerous songs that demonstrate this band's skill at making the heavy stuff (and it's mostly heavy stuff) hit with chest-cavity-collapsing force and the space trippin' moments on songs like "Redeemist" akin to a frontal lobe tickling. And we've barely even gotten into the meat of that 11-minute display of metallic magnificence, a piece that also features a SLEEP-plowed chorus of "Defender! Redeemist!" that is as unforgettable as it is primal. Much like so many other moments on the album, that simple refrain just has a way of crawling into your head and setting up camp for the night.

"Defender, Redeemist" is so many things, all of them grand and exquisitely gnarly. It is a mid-tempo, muscular and swaggering section of "Desolizator" or it is the tones of "We are the Worm" that make one think of Bronze-era MOTÖRHEAD getting a stoner rock makeover. It is the compositional depth of the 14-minute "Cast on the Black/Lamentor/Guided by the Southern Cross", which would require a full page in order to describe all of its ass-whuppin' qualities, as well as an impressive compositional depth that includes some rather OPETH-ian acoustic segments. The facets are many that make "Defender, Redeemist" equally appealing as a big, hairy beast of metal and as a prime example of intelligent arrangement that doesn't require a degree in music theory to fully appreciate and absorb. BEHOLD! THE MONOLITH is one bad-ass trio that has made one bad ass album in "Defender, Redeemist".