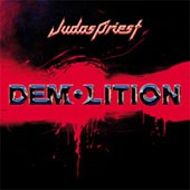 To most longtime JUDAS PRIEST fans, the band's 1997 offering, Jugulator, was a competent comeback effort that fell slightly short of greatness but bode well for the future, thanks to a barrage of excellent riffs and a superb vocal performance from Tim “Ripper” Owens, who was widely hailed as a more than worthy successor to the then-musically confused Rob Halford. Expectations were running high for the album's eventual follow-up effort, with the group themselves promising a more varied collection that the aggression-laden Jugulator, which was deemed sadly devoid of the kind of classic melodies that made the group's earlier effort so timeless.

Well, the long-awaited album is finally upon us, and it can only be described as a major disappointment, both in terms of the songwriting and the vocal performance, with the flat production doing little to elevate the quality of the material to the heights that we've come to expect from PRIEST. Whereas Jugulator still managed to include some impressive wailings courtesy of Ripper, Demolition sees Owens sticking mostly to his middle range, a factor that only goes to emphasize the stunning lack of first-rate material offered herein.

It's hard to imagine what guitarists Glen Tipton and K.K. Downing were thinking when they pieced together the songs that make up this album, such is the low quality of the songwriting behind this self-produced effort. In addition to a surprisingly large number of forgettable riffs and less-than-inspired-sounding vocal lines, we are provided with an even more embarrassing host of lyrical “nuggets” that should see Tipton covering his face in shame (a particular lowpoint: “So you motherf.ckers want to race/You've got losers tattooed on your face” from “Machine Man”)—a clear indication that the man has either lost the plot or his creativity, or perhaps both.

While Rob Halford has successfully managed to bridge a gap to his past by rehashing PRIEST's early sound and repackaging it on his HALFORD debut, JUDAS PRIEST have reached a new low on this CD that is all but certain to be panned by critics and fans alike, ultimately paving the way for the inevitable reunion with Halford (an unthinkable concept four years ago that now seems the group's only chance of regaining its credibility).

Demoliton is the sound of a desperate band on its last legs—an album that will go down as one of the least impressive releases in JUDAS PRIEST's illustrious recording career.