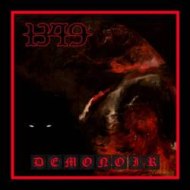 To my ears the first three 1349 albums are among the best black metal triple-shots ever released, each one feral and uncompromising, yet with each subsequent album the band was developing both its identity and songwriting. Arguments have been made about the purity of "Liberation" compared to "Beyond the Apocalypse" and "Hellfire" (or both to "Hellfire"),most of which comes down to one's perception and usually amounts to little more than hair splitting and questionable disapproval of 1349's career ascent. Having gained momentum, particularly in North America where crowds were shocked and awed with 1349's live intensity, it seemed that the band was on the precipice of total world domination. Then a monkey wrench was thrown into the works with the release of "Revelations of the Black Flame" on which the band revealed its experimental side to mixed reaction.

That brings us to the new album (on a new label) called "Demonoir", one the members have described as a return to the more "traditional" style heard on the first three releases. While that statement may be generally accurate, it requires some qualification. Anyone with concerns about 1349 showing a kindler, gentler side of Norwegian black metal (as oxymoronic as that would seem) can rest assured that "Demonoir" attacks with all the mercy of a Navy SEAL team storming a terrorist-occupied dwelling. On the aforementioned triumvirate of albums 1349 became synonymous with "ferocity" and "Demonoir" is a full frontal reinforcement of that ferocity. Frost continues his inhuman display of concussive rhythmic battery like no one else and you damn well better be a fan because Tom G. Warrior's (CELTIC FROST, TRIPTYKON) productions places the sound of his kit front and center in the mix, maybe a little too far out front, considering that it sometimes overwhelms all the acid-splash guitar playing going on. Once you settle in and get used to it though all the remaining elements of the sinful symphony fall into place for a more enjoyably holistic, albeit nerve fraying, experience.

Oh yes, the differentiating factors… While "Demonoir" hits like a scorned wife lambasting a cheating husband's face with a frying pan, vocalist Ravn, guitarist Achaon, bassist Seidemann, and Frost have become adventurous with the arrangements, periodically twisting and outright disfiguring conventional structures into multi-directional aural assaults. There is no denying the band's patented shrapnel-blasting approach on songs like "Atomic Chapel" and "When I was Flesh" is as savage as ever, but the riffing and certainly the vocal patterns are less predictable. Traditional minor note runs may suddenly turn in ways more aligned with the spitting of flames and the hurling of throwing stars, not to mention the range of accents involved this time, whether the purposefully asymmetrical vocal lines, the semi-whispers or the low register chant/choral bits ("Atomic Chapel").

Fear not; the approach taken steers well clear of esoteric overdrive; as one is sternly reminded when a riff flies out of "Psalm 7:777" (great tune) that'll rip your face right off. It is just that 1349 has taken its abusive tendencies and wrapped them around often longer, more interesting arrangements (check out "Pandemonium War Bells" and the title track),while sandwiching the proper tracks with noisy/spooky interludes that, quite honesty, can be taken or left. The short of it is that while I'm still partial to "Hellfire", "Demonoir" is a vicious, unnerving, and terrifically teeth-rattling return to form.