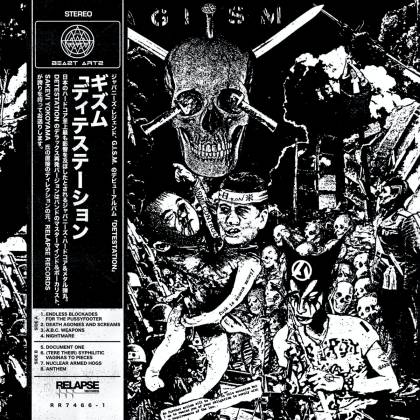 The collective has been known as a variety of names including GOD IN THE SCHIZOID MIND, GUERRILLA INCENDIARY SABOTAGE MUTINEER, GENERAL IMPERIALISM SOCIAL MURDER, GNOSTIC IDIOSYNCRASY SONIC MILITANT, GAI INDIVIDUAL SOCIAL MEAN and GENOCIDE INFANTICIDE SUICIDE MENTICIDE. But the name by which the entity has been etched eternally in the annals of extreme music history is the acronym that ties the aforementioned monikers together: G.I.S.M. The Japanese band's value is unfortunately outshined at times by the over-the-top madness, on and off stage, surrounding notorious frontman Shigehisa "Sakevi" Yokoyama. He has been imprisoned for his violent tendencies. He once attacked a businessman on a Tokyo subway simply for staring at him, according to lore, anyway. There is no disputing the fact that he attacked show-goers, journalists and photographers. Sakevi has fired gunshots onstage. He has stormed an audience with a chainsaw, and with a lit flamethrower.

But the extremity of behavior wasn't simply a gimmick, it was an essential facet of the essence of G.I.S.M., and ultimately augments the experience. Legendary extreme music label Relapse Records is breathing life into the act's classic debut album by reissuing "Detestation", a version which includes three bonus tracks. One can debate whether they were a hardcore punk ensemble that was influenced by heavy metal or vice versa ad infinitum, but whatever the case may be, there hasn't been a band like G.I.S.M. ever since. And they truly were so much more than that. While "Detestation" is an early template of metallic hardcore, the release also finds G.I.S.M. seamlessly integrating styles as varied as seventies glam rock, clanging industrial and manic speed metal into an experimental whole that is simply unlike any other.

Sakevi's vocal style is primitive yet significantly dynamic on a track like opening number "Endless Blockades For The Pussyfooter". The madman utters lyrics with a spoken word quality one moment, he belches the next. And that's before he laughs like a madman who one would envision is straightjacketed in a mental institution. Then he unleashes black metal-esque barking and unhinged howling. In spite of the notorious frontman's attention-grabbing salience, guitarist Randy Uchida offers a performance that simply can't be overshadowed. The most notable aspect of his adventurous playing was his unabashed heavy metal soloing and riff work, gloriously overflowing on a song like "Document One". Uchida sadly died due to cancer in 2001, not long after the release of the unit's third album, the swan song, "SoniCRIME TheRapy".

"Detestation" can certainly be filed under the "love it or hate it" section. The performances are at times as raw and unrefined as the production. It's loud, obnoxious and sloppy. But the organic delivery is a part of its beauty. There is so much going on, and there is so much to wrap your head around on this album. G.I.S.M. was a metallic eighties hardcore punk band fronted by someone who might have freaked out GG Allin, while the savage guitar riffing was juxtaposed with NWOBHM-inspired solos. G.I.S.M. was and always will be one of a kind, and "Detestation" is a seminal extreme music album that opened the door to new musical possibilities that are still being explored.