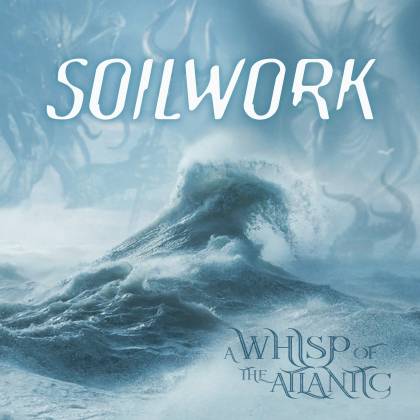 A Whisp Of The Atlantic

Firstly, let's briskly dispense with the notion that "A Whisp Of The Atlantic" is an EP. The whole concept of EPs has been widely abused in recent years: the fact that this five-track effort lasts roughly nine minutes longer than "Reign in Blood" should push it way past whichever marker one requires for album status. Does it matter? In normal circumstances, probably not. But as this is one of the finest records SOILWORK have made in a long time, it seems a shame to reduce it to borderline stopgap status.

In truth, "A Whisp of The Atlantic"would be an EP were it not for its colossal title track. Sixteen minutes in length and easily the boldest and most inventive thing the Swedes have ever recorded, it crams in multiple cherished aspects of their sound while pushing the whole experience into sparkling new territory. The melodies are, as you might expect, uniformly huge and yes, Bjorn "Speed" Strid continues to mesmerize with his extraordinary vocal talents, but this is manifestly a team effort and the whole band have excelled themselves here, both in terms of composition and performance. Gripping from start to finish, "A Whisp Of The Atlantic" brims with brilliant ideas: a lesser band would have milked each one for a stand-alone song, but SOILWORK have created something far more immersive, intriguing and powerful instead. The song's plaintive, jazzy trumpet coda is a particularly neat bit of mischievous rug-pulling.

After that, the other four songs can hardly fail to be overshadowed, but each one of them points to yet more evolutionary steps being taken by this classiest of notable melo-death bands. "Feverish" is a sublime mini symphony that wrings endless drama from SOILWORK's nuanced but thunderous ensemble performance. "Desperado" and "Death Diviner" are both instant anthems, with Strid switching effortlessly from barbarous roar to syrupy croon. But it's important to note that this incarnation of the band seem to have jettisoned all formulae in favor of a multifarious metal approach. Doubtless there will always be some old-school fans still praying for a return to the straight-ahead brutality of SOILWORK's early albums, but their breadth of vision and fearlessness simply won't allow that to happen. Instead, as they demonstrate on "The Nothingness And The Devil" — a gleefully deviant blend of old-school tropes and cutting-edge fury — these veterans are still perfecting their craft and continuing to grow as songwriters. That title track is the clincher, though: it's hard to imagine any of SOILWORK's more obvious peers pulling off such a dizzying indulgence with anywhere near the same level of flair.