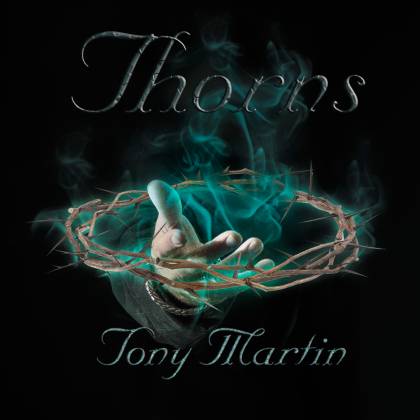 When legendary bands replace iconic vocalists with new frontmen, apprehension takes hold. Bands as varied as AC/DC, DEEP PURPLE, RAINBOW, IRON MAIDEN, VAN HALEN and ALICE IN CHAINS were put to the test for various reasons — numerous times for some — and the results varied immensely. The debate within the peanut gallery regarding BLACK SABBATH generally focuses upon Ozzy Osbourne and Ronnie James Dio, and while there were others, Tony Martin was a praise-worthy unsung hero. Martin's contributions to BLACK SABBATH have been overlooked or dismissed by many, but his performances, as well as the material, weren’t always given a fair shake and assessment. Hindsight is 20/20, and however one rates his work with the pioneering heavy metal beast, Martin returns now with his third solo effort, "Thorns", an album that’s certainly worthy of SABBATH fans, contemporary and old-school doom aficionados, as well as open-minded hard rock followers' attention.

"Thorns" is a monstrous album in terms of songwriting, instrumentation and, of course, the focal point that is Tony Martin. Martin sings with the passion and hunger of a twenty or thirty something. Perhaps he still has that drive because he has always lived under Ozzy and Dio's shadow? Whatever the case may be, his delivery is soulful, and the English frontman has certainly taken care of his voice over the years. The unabashedly eighties heavy metal-inspired opener "As the World Burns" sets the tone for all that follows, and sets a high bar that the rest of the album successfully reaches.

"Black Widow Angel" rests upon a bluesy, doom-based TROUBLE-like groove. Martin's high-register vocal delivery during the chorus is so feel-good in nature that it’s likely to elicit smiles from even the grumpiest of metalheads. Elsewhere, chants sounding as though they're beaming from an ancient cathedral introduce "Book of Shadows", and Martin leads the song to even greater dramatic heights tactfully avoiding melodrama's pitfalls. "Nowhere to Fly", meanwhile, harnesses a brooding and pensive energy that swells from calmness to a more overtly bombastic and metallic drive, ebbing and flowing subsequently thereafter. "Thorns" is dynamic and well-balanced, and the ensemble brings back the heavy metal thunder on "Run Like The Devil" with the subtlety of a fist to the face.

Comparisons are inevitable, and it's clear that Martin hasn't made quite the mark that Dio and Ozzy have. Yet we have lost the former, while the latter seems to have lost his way musically many years ago. With "Thorns", Martin demonstrates that he still exudes heavy metal's fire and burning passion. He will most likely be most known for the SABBATH albums "Eternal Idol", "Headless Cross", "Tyr" and "Cross Purposes", but here he has proven himself artistically as powerful as ever.