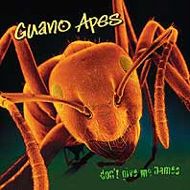 Don't Give Me Names

Although they've had limited commercial success Stateside, Germany's GUANO APES have been a huge hit in Europe, and in particular their homeland, where this album entered the pop charts at #1 the week of its release in early May (the group's last album, Proud Like A God shifted some 650,000 units in Germany alone!).

Sounding not a million miles removed from another female-fronted act, SKUNK ANANSIE, the APES are a hard-edged rock quartet who are capable of churning out hook after hook while spanning a variety of different musical feels, from the high-energy stomp of "Big In Japan" (a cover of the ALPHAVILLE hit and the album's first single) to the softer, more sensitive moments of "Living In A Lie". And like SKUNK's Skin, it is GUANO APES' frontwoman, Sandra Nasic, that is the star of the show here—her powerful set of pipes as soulful as they are venomous—and it is largely due to the singer's stunning performance that the songs come alive as well as they do.

Being that SKUNK ANANSIE have yet to achieve the kind of success in this country in the same way that they've done back home, it's easy to assume that GUANO will suffer the same fate. However, with a slightly less eclectic musical approach and a less blatantly political stance than their UK counterparts (not to mention the fact that they don't have a black bi-sexual fronting the band),GUANO APES are probably far better suited for the American mainstream—a factor that will hopefully result in greater Stateside recognition for these Germans' world-class brand of alternative rock.