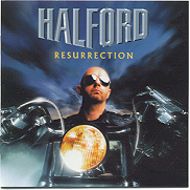 Following a near decade-long hiatus from the traditional heavy metal world that spawned his musical career, former JUDAS PRIEST vocalist Rob Halford has returned to doing what he does best, much to the delight of the PRIEST fans that were less than thrilled with the singer's brief—and utterly commercially disastrous—foray into the industrial rock territory (with the ill-fated TWO project). Although this latest move can be easily construed as nothing more than a desperate attempt at winning back the fans that lost interest in Halford's career during his more "experimental" days, there is no doubting the quality of a lot of the material on this 12-song effort, much of which sounds like it could have easily fit onto any of PRIEST's heavier Halford-fronted studio releases.

Opening with the excellent, "Painkiller"-like "Resurrection", this is classic heavy metal served up with a decidedly modern flavor, one that is most apparent in the album's thick, guitar-heavy production, if not in the actual musical content. "Made In Hell" (which includes some of Halford's most cringe-worthy lyrics ever!),"Night Fall", "Silent Scream", "Cyberworld" and "Saviour" are other personal favorites, featuring Rob's strongest vocal performance since 1990's Painkiller and sounding much closer to the traditional PRIEST material than was the case with the latter band's 1997 Jugulator offering. On the flipside, the much-publicized pairing of Halford and IRON MAIDEN vocalist Bruce Dickinson on "The One You Love to Hate" fails to live up to the advance hype, the song in question being a rather average number that coasts along unspectacularly, while "Locked And Loaded" is by far the weakest track on the offer, its cock-rock feel bringing to mind some of PRIEST's much-loathed musical lowpoints.

Much like management stable mates MAIDEN, Halford has made zero attempt at incorporating fresh elements into a tried-and-tested formula and is instead focusing exclusively on rebuilding a connection with his old fans, many of whom are invariably feeling disenchanted with the current rock scene. As a result, it can only be considered a partial success, but a crucially face-saving one for a man that was all but written off as a trend-hopping fake less than three years ago.