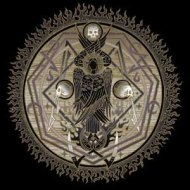 It sure is looking like WEAPON's "Drakonian Paradigm" will end up my favorite black metal album of 2009, or at least sharing the honor with MARDUK's "Wormwood". But the funny thing is that what makes "Drakonian Paradigm" such an intriguing and wholly entertaining album is the fact that it does not restrict itself to an airtight BM box. Rather, it is the fact that the Canadian clan focuses on writing good songs that draw just enough influence from traditional, thrash, and death metal to keep the songs fresh and memorable, yet not so much as to be directionless or unrecognizable as black metal. That quality combined with gritty and scathing textures, a loose (not sloppy) and natural delivery, and unholy — yet somehow mystical — atmosphere make "Drakonian Paradigm" an album that is just different enough to have folks either scratching their heads or proclaiming brilliance.

Yet "Drakonian Paradigm" is not an album that grabbed me right off the bat, but it kept me coming back and got better with each spin, generally the sign of an effort with lasting appeal. Opening instrumental "Weapon" is the first hint that there are far more to "Drakonian Paradigm" than blast beats and tremolo picking. A perfect, albeit grimy, mix of trad, death, and black metal, the number is also much more than a traditional (read: obligatory) intro, the leads and thrashy rhythm romp particularly notable. "Cacaphony! Black Sun Dragon's Tongue!" and "Serpentine Ayat" arrive next and really begin to reveal the depth of the product. Along with Vetis Monarch's throaty, mid-range growls comes a death/black attack that moves between mid-range and quick-step and includes the first of several moments where non-traditional (for BM) backing shouts/vocals are expertly executed. The latter is a three-minute, kinda-groovy/kinda-spooky triumph of evil that brings with it nearly indescribable — due more to the feeling evoked than the method — backing shouts (e.g. "Kali Ma!") that straddle the line between metal and punk in the creepiest of ways. And yet, more than anything else the track just plain kicks ass. It is one of many examples where the little things make all the difference in the world (i.e. Monarch's growls alternating between the right and left channels at one point) and that includes that certain something that separates the sound of a band going through the motions from one going for the throat.

Three seven-minute exercises in songwriting dynamics come next and offer even more in the way of accent, coloration, and mood, thanks in part to the grand piano and synthesizer work of John McKay. "Mortem Pyre (In Darkness & Blood)", "Archana" and "Drakonian Paradigm: The Flame of All" are expertly arranged, incorporating doomy breaks, odd (yet effective) melodies, festival-ready backing shouts (during "Mortem Pyre"),light-to-dark juxtaposition, buzzing black 'n roll, acidic riffing and, in simplest terms, just a lot of righteous sections that seamlessly connect to make a convincing whole.

After wrapping up appropriately enough with a blend of styles/tempos called "Remnants of a Burnt Mosque", though with an emphasis on the doom-laden and the ugly (even the acoustic bits),one is left with the feeling that they've experienced something, not just heard it. It is, more than anything else, what sets "Drakonian Paradigm" apart from the pack. Kudos for the nicely packaged 12-page booklet too. Easily one of the most unique black metal releases of 2009, which fortunately does not translate to esoteric, meandering bullshit disguised as "art". And for those of you that just can't handle the technological overload of compact discs, a cassette version will be licensed to InCoffin Productions.