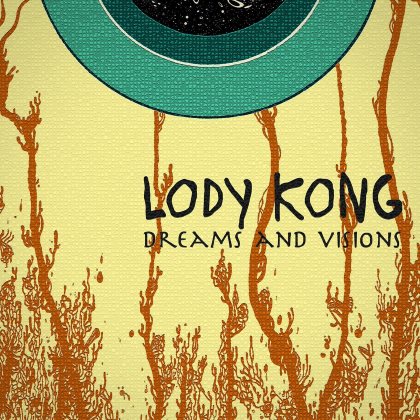 Yep, it's in the family. The Cavaleras have a veritable dynasty in the making as Max and Gloria's progeny are staking their own futures in metal. To say the elder Cavaleras are proud is to say the warnings of "Chaos A.D. " threaten to play out more than two decades after they were issued.

Igor, Jr. handles bass and lead vocals—at one point, rhythm guitar—in LODY KONG, while Zyon slams the beats in this trio. This second generation of Cavaleras has been pushing LODY KONG since 2011, after Igor, Jr. and Zyon moved on from their previous unit, MOLD BREAKER. Until last year, LODY KONG included John Bauer, Shea"Shanks"Fahey and Noah Shepherd. Leaner and absolutely meaner, LODY KONG at last releases its debut album, "Dreams and Visions", and though occasional repetition becomes a relative chore, the next-gen Cavaleras have something cooking here.

How does one describe LODY KONG when the group’s members have metal royalty in the way of Max and Gloria Cavalera for parents? First, we can say LODY KONG is nothing like SEPULTURA, SOULFLY, NAILBOMB or even INCITE. Zyon and Igor, Jr. are certainly working their own vibe, which has a metalcore base to its trundling grooves. There's more to the scheme, though. Groove is what works best on "Dreams and Visions", as Zyon Cavalera pounds the snot out of each track. He's beastly on the title track, "Pig In The Pen", "Smashed and Blasted", "Some Pulp" and "Venomous Kool-Aid". While the pissy snarls and agitated bass knocks from Igor, Jr. give a ferocious palette to dump LODY KONG's screechy guitars all over.

The first couple tracks "Chillin', Killin'" and the title cut set the primer from which LODY KONG systematically arranges its gnashing tracks. "Kreative Center" then chaws along at a moody, mid-tempo pace, allowing the chuffing riffs to jive atop Zyon Cavalera's brawny shucks. Its strapping slog gets picked up by impressive double-hammer drops and wailing guitar slashes. "Pig In The Pen" afterwards is a mosh-worthy stomper, while the snide "Smashed and Blasted" is a neo pit-masher's best friend. What's harder than the beats on "Smashed and Blasted" is Igor, Jr. 's profanity, and whomever he's addressing stands to do at least a mile-long walk of shame in its wake. Ditto for "Some Pulp", which boasts gruesome riffs to accent Igor, Jr. 's tirades. Point of cred on "Some Pulp" for a cool, HELMET-esque signature swing toward the end. The punk-driving "Topaz", two tracks later, is one of the tightest, off-the-path tracks on "Dreams and Visions".

If there's one thing LODY KONG probably needs to veer from as the group progresses into its next album, it's to lighten up its impulse on this one to topple into a stuck mojo of slow-mincing breakdown sequences. The Cavalera brothers possess the power of the riff and a capacity for hard-hitting beats. Lessons learned pragmatically on the road with a classy family still writing their chapters-deep history in this genre.