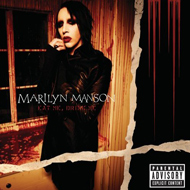 Eat Me, Drink Me

Can we all please finally agree that Marilyn Manson has not made a single great album in his entire career? Although each of his previous studio efforts has featured at least a couple of excellent songs ("The Beautiful People", "The Dope Show"),most of his output has been subpar, lacking any truly compelling songwriting or playing, while the mastermind himself slathers his overwrought vocals in all kinds of effects and tricks. Manson has always been a classic case of style over substance, an attention-grabbing provocateur with little to offer underneath his questionable shock value.

So when word got out that the appallingly titled "Eat Me, Drink Me" (um, no thanks, Brian) would be a more heartfelt, personal album, one had to wonder if Manson was finally turning some sort of corner. The highly public collapse of his marriage to dancer Dita von Teese seemed to really leave him distraught — what would this mean to his music?

If anything, it made it worse. "Eat Me" is unrelentingly gloomy, morose and self-pitying, and once again Manson and main collaborator Tim Skold largely strike out in the songwriting department. "If I Was Your Vampire" and "Putting Holes in Happiness" get the record off to a draggy, druggy start, and it never really recovers from there, despite the odd catchy riff or even the faux-New Wave hooks and sprightly shuffle of single "Heart Shaped Glasses". But even that is soon forgotten as we wade through more unmemorable tracks like "Are You The Rabbit?" and "Evidence".

Even the relatively upbeat "You and Me and the Devil Makes 3" starts somewhat promisingly with a drunken, swaggering riff, but eventually disappears into a repetitive morass of heavy breathing and whispered vocals. Now, Manson has never been about happy, peppy pop songs, but even the sense of electric outrageousness that did permeate his best older numbers never really emerges on this album, which cloaks itself in such a curtain of darkness that it's hard to hear any real music being made.

Never anyone's idea of a good singer, Manson sounds particularly thin on this record, even with all the electronics and multi-tracking. A lot of production and atmosphere have gone into "Eat Me, Drink Me", and maybe Manson has indeed bared his heart here, but based on the results, he shouldn't force listeners to make a meal of it.