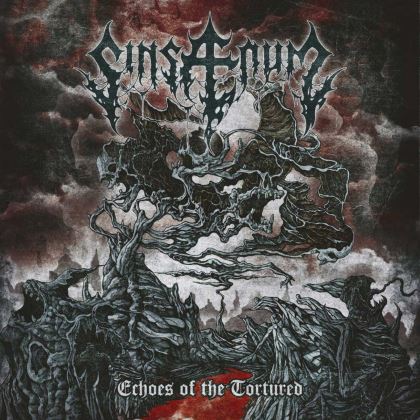 Echoes of the Tortured

A smorgasbord of musicians from death and black metal bands with power metal and nu metal luminaries coming together in one band doesn't make much sense on paper, but the devil is in the details. It seems that's what SINSAENUM is attempting to summon with their debut, "Echoes of the Tortured", sonically, anyway. Former SLIPKNOT drummer Joey Jordison (MURDERDOLLS, SCAR THE MARTYR, VIMIC) and DRAGONFORCE's bassist Frédéric Leclercq bonded over their mutual love of extreme metal years ago while the aforementioned bands toured together. Recent conversations between the two spurred on Jordison's involvement and helped Leclercq, who performs guitars, bass and keyboards, realize his vision, which includes some material he penned as far back as 1998, dispelling any notion that this is merely a spur-of-the-moment effort.

Leclercq's fellow countrymen Stéphane Buriez, from long-running death thrashers LOUDBLAST, and Heimoth, from black metal act SETH, flesh out the additional guitar and bass parts, respectively. None other than Attila Csihar of MAYHEM and SUNN O))) provides the vocal work along with Sean Zatorsky, who has done time with CHIMAIRA and DAATH. Their fist-pumping choruses reflect the release's shamelessly epic nature, most prominently on "Army Of Chaos" and "Holocaust". A veritable who's who collection of metal musicians does not necessarily a good band make, however. But in the case of SINSAENUM, they've sculpted a ferocious slab of high-quality blackened death.

Precise performance and crystal-clear production reveal SINSAENUM to be a polished beast in terms of approach and presentation, in this sense not unlike darkened metallic veterans as varied as BEHEMOTH or DIMMU BORGIR. The degree to which one finds this appealing or desirable will steer people either toward or away from the band accordingly. As far as substance, however, closer reference points would be VADER or MORBID ANGEL. "Dead Souls" starts off, in fact, with evil guitar howling reminiscent of Trey Azagthoth. Following the menacing, lumbering, chunky riff that opens "Final Curse", the guitar work unravels with a CRYPTOPSY-like dizzying frenzy pressed through the filter of frigid, second-wave black metal.

In all but one instance the songs are divided by instrumental interludes, structured as such partially to provide a calm before the storm of each proper song in an effort to maintain attention and potency in a front-to-back listening session. It's ironic, then, that while the interludes are decent enough, they're all essentially worth skipping, rendering the intent for which they were designed null and void.

Leclercq's impressive, dexterous lead work graces the entire release, including its most dynamic track, "Anfang des Albtraumes", which highlights the members' exceptional abilities. The song begins with Jordison's blasts driving an evil, ripping riff that demands your attention. Csihar's haunting spoken-word parts equally tear at your attention, and his characteristic moaning brings to mind a man possessed. This is in stark contrast to Zatorsky's robust, deep roar. There is indeed a lot to digest, but it isn't tiresome. There is a sense of immediacy throughout, yet the rewards are fruitful for those willing to invest their time into the debut of a band that feels nothing like a side project.