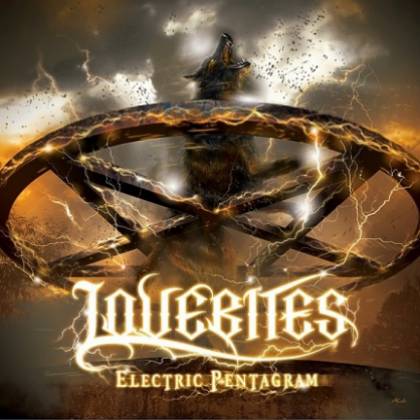 There's nothing more satisfying than shutting people up. With their first two albums, and a whole bunch of acclaimed live shows, LOVEBITES swiftly proved that the fact they are an all-woman group that collectively weigh slightly less than one of Chuck Billy's forearms is, thank the metal gods, the least interesting or impressive thing about them. You'll notice it again when "Thunder Vengeance" erupts at the start of "Electric Pentagram": this band absolutely fucking rip and, amusingly, they also make a lot of all-male power metal bands sound a bit lily-livered and feeble.

LOVEBITES will continue to win metalheads over because they consistently nail the strongest and grittiest aspects of traditional and power metal, and seem to be incapable of writing a bad song. "Holy War" is glorious: part symphonic melodrama, part old-school shred-up. "Golden Destination" is HELLOWEEN on steroids, with some of the most blistering lead work you'll hear in 2020 and a delicious AOR sheen. "Raise Some Hell" is a turbocharged cock rock stomp with a thrash 'n' roll heart. "When Destines Align" is state-of-the-art speed metal with a wickedly overwrought chorus worthy of PAT BENATAR or BONNIE TYLER. "Frozen Serenade" is LOVEBITES' most joyfully epic moment to date; a change of pace that allows vocalist Asami to shine even more than she does on the rest of these fervently melodic tunes. Her powerhouse vibrato is one of the band's not-so-secret weapons, and it's her presence that makes "Electric Pentagram" such a distinctive record in an absurdly crowded marketplace. On the closing "Swan Song", she nearly blows the roof off with a none-more-classic Euro-metal chorus, embellished with harmonies of effortless brilliance.

If there's any criticism to be levelled here, it's that "Electric Pentagram" is probably a song or two too long. No one really needs a 70-minute metal record, unless it's by OPETH or TOOL (and even then you might skip the bongo jams),and even fewer people will actually listen to the whole thing at this point. But don't listen to a miserable middle-aged white man railing against the modern age. Listen to LOVEBITES and pay your respects to one of the most punishing and powerful melodic metal bands on the planet.