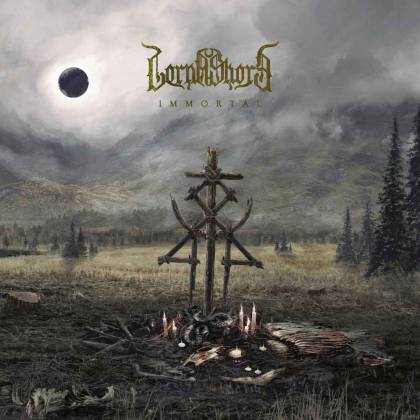 Oh man, this is a difficult one. Everything was set up so perfectly for LORNA SHORE to return with an explosive third album and leap a few rungs up the deathcore ladder to somewhere near the very top. On the evidence of "Immortal", that still may happen, and it certainly deserves to in light of the band's swift and honorable sacking of vocalist CJ McCreery at the end of 2019. You can read about exactly why McCreery was jettisoned elsewhere on the internet, but it's safe to say that he won't be missed. Meanwhile, his (admittedly killer) vocals remain on this album because, as the remaining members have graciously pointed out, fans have been waiting for three years for new music and it simply wouldn't be fair to make them wait another six months while a new vocalist is recruited and new vocals laid down on these tracks. "Immortal" is ready to roll and, departed assholes notwithstanding, sounds very much like the work of true heavyweights. This is epic, deftly melodic and often startlingly atmospheric deathcore, rather than the usual cut 'n' paste, Pro-Tools'd-to-almighty-fuck variety of the genre. And these are genuinely great songs, too, from the hulking sprawl of the opening title track and the virulent, blackened scree of "Death Portrait" to the more succinct bludgeon of preview singles "This Is Hell" and "Darkest Spawn".

At times "Immortal" has more in common with THE BLACK DAHLIA MURDER or even CRADLE OF FILTH than it does with most standard deathcore fare, and yet the New Jersey crew also have a knack for delivering textbook, knuckleheaded beatdown moments, too: the lumbering climax to "This Is Hell" being one particularly heroic exercise in smashing stuff with a giant deathcore hammer.

With lashings of dense orchestration and a variety of twisted electronic textures providing extra layers of intrigue and charisma, "Immortal" is grandiloquent and ambitious in a way that deathcore generally hasn't been before. Not that LORNA SHORE are the first band to skillfully weave other elements into the formula, of course, but they've made it sound a lot more exciting than anyone else in recent memory. Until they recruit a new singer and hit the road again, this monstrous record should put the band's name in the headlines, and for vastly more agreeable reasons this time.