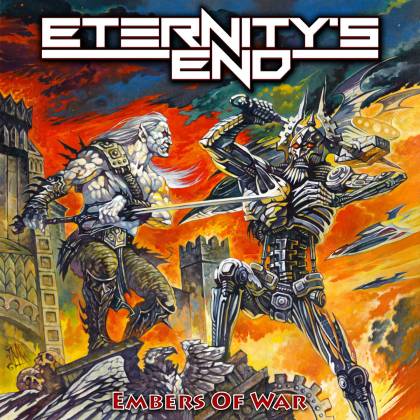 Someone at PROSTHETIC RECORDS deserves a pat on the back for continuing to explore the cutting edge of traditional heavy metal. Following on from stellar releases from PALADIN and JUDICATOR, "Embers Of War" shines a well-deserved beam onto the brilliance of ETERNITY'S END, a German quintet with two excellent previous albums that received widespread acclaim but far less media attention than they plainly deserved. Now rightfully embedded at one of modern metal's best-respected labels, they have wasted no time in producing an album designed to incinerate eyebrows from a mile away. ETERNITY'S END, to put it more simply, will rip your fucking face off.

This is nobly traditional stuff, rooted in progressive and power metal but imbued with the tooth-rattling aggression of speed metal sensibilities of latter-day upholders of ancient principles like ARCH ENEMY and CHILDREN OF BODOM. The result is remorseless in its epic, thunderous and leather-clad bombast, and delivered with such intensity that any sense that ETERNITY'S END are just another power metal band is brutally jettisoned a few seconds into opener "Dreadnought (The Voyage Of The Damned)". And then you notice that this band boasts not just the inestimable talents of guitarist Christian Münzner (also a member of OBSCURA and ALKALOID) but also the percussive majesty of Hannes Grossman (ALKALOID, BLOTTED SCIENCE, HOWLING SYCAMORE and many more!).

While not exactly a supergroup, ETERNITY'S END have such technical prowess that they could easily disintegrate in a blizzard of blank-eyed showmanship, but these songs are firmly rooted in the classics, and their creators' passion for an old-school melodic ethos is abundantly apparent. There is plenty of blurred-finger, neoclassical showboating going on, of course, and songs like "Bane Of The Blacksword" and "Call Of The Valkyries" will have most shred-heads foaming at the mouth, but with vocalist Iuri Sanson a formidable, versatile presence, and every song boasting a giant, arena-friendly chorus, the balance between indulgent and incisive is more or less perfect.

There is nothing quite like the sound of a great heavy metal band making a flamboyant exit. The title track fulfils that role here, across nine wild minutes of hacksaw riffing, machine-gun kick flurries, heroic vocal refrains and windswept melodic motifs. Whipping along at a breakneck pace, while making the whole virtuoso thing sound incredibly easy, ETERNITY'S END are audibly hell-bent on delivering some true heavy metal at maximum volume, with endless muscularity and musical intelligence to back it up. Pats on the back all around, then.