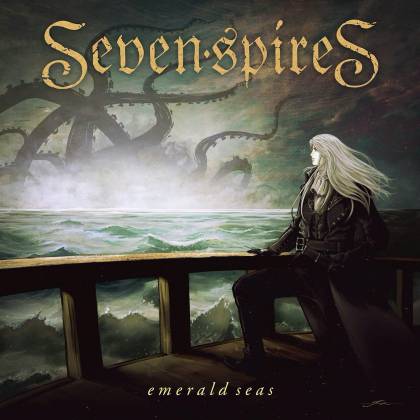 There is no mistaking precocious talent. When SEVEN SPIRES released their debut album "Solveig" in 2017, it may not have set the world alight, but it clearly heralded the arrival of a uniquely exuberant and inventive new force in the increasingly interchangeable worlds of power, symphonic and traditional metal. Fronted by the absurdly versatile and charismatic Adrienne Cowan and blessed with one of the most gifted young guitarists around, Jack Kosto, this gang of incurable metallic romantics conjured a debut full of great songs, but songs that resolutely refused to be nailed to one genre mast nor another.

Cowan's tendency to switch into screeching banshee mode aside, SEVEN SPIRES are a fervently melodic band with strong links to the power metal scene, but with often startling skill and grace, they filled "Solveig" with unexpected detours into more extreme territory, while also pumping everything with enough progressive and symphonic substance to keep several other potential audiences blissfully happy too. That was just the start, of course, and all that potential would go to waste if the follow-up failed to repeat the trick or, ideally, to outstrip it completely. Joyously, "Emerald Seas" achieves the latter goal with ease, trumping its predecessor on every level and adding countless extra layers of intrigue and depth to its creators' genre-melding sound. It's also vastly more theatrical than "Solveig", as SEVEN SPIRES indulge their dark, poetic fantasies across intricate, sprawling metal epics that frequently seem to owe as much to CRADLE OF FILTH as they do to KAMELOT.

It would take some self-control to avoid being bowled over by the sheer exuberance of opener "Ghost of a Dream". This is gloriously opulent melodic metal at heart, but there's a venom in the band's delivery and an audible twinkle in their singer's eye giving everything here a delicious frisson of malevolence. "No Words Exchanged" and "Every Crest" are instantly memorable anthems, with Cowan scaling the octaves like some magical diva, while "Unmapped Darkness" is a grittier, shadow-strewn slice of melodrama, with a chorus so thrillingly overwrought that it deserves a medal for services to keeping the Disney dream alive. First single "Succumb" is a buoyant miniature masterpiece: quite how Cowan hits some of those notes may be a matter for the local witchfinder, but SEVEN SPIRES are unerring in their inspired use of chord and key changes, never quite doing the obvious but delivering melodic payoff after payoff, often before diving off on another preposterous tangent, or into a blizzard of blastbeats, but always wrapping things up within three-to-five immaculate minutes

That they manage all this while still blistering away like the audacious virtuosos they clearly are — well, it's a little bit sickening, but it's also beyond exciting to hear a new band operating in this part of the metal world and doing something authentically new and utterly irresistible with such beloved ingredients. "Emerald Seas" never flags for a second: this is the eyeball-dislodging boot up the backside that power metal has needed for a while. Some of these songs (the pitch-black, gothic squall of "Drowner Of Worlds"; the almost indecently sumptuous "Fearless") will haunt your dreams. The rest will make you punch the air like a massive goof. "Emerald Seas" is, and I can't apologize enough for this, an absolute gem.