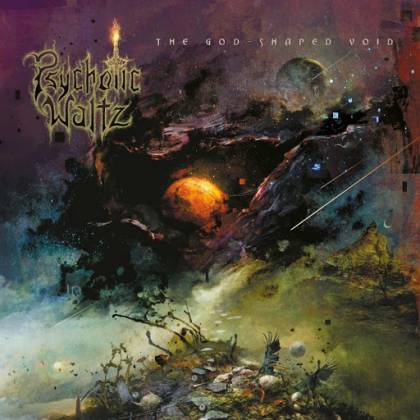 If you have recently been disturbed by the distant sound of whimpering, it was probably just a bunch of middle-aged prog metal fans becoming mildly hysterical about the prospect of a new PSYCHOTIC WALTZ album. And rightly so. Because while there were undoubtedly bigger and more widely celebrated bands to emerge from prog metal's first decade, connoisseurs of this stuff know that nothing much beats the first two albums these Californians made back in the early '90s: "A Social Grace" (1990) and "Into the Everflow" (1992). In fact, their third and fourth albums were killer, too. So yeah, the arrival of "The God-Shaped Void" is definitely cause for celebration, and the party will get even more raucous when patient fans realize that the first PSYCHOTIC WALTZ album in 24 years is every bit as good as its revered predecessors (and maybe even slightly better).

It's particularly sweet that "The God-Shaped Void" arrives at a time when progressive metal has a bigger audience than ever before. PSYCHOTIC WALTZ were always too idiosyncratic and unpredictable to slot neatly into the same genre pigeonhole as DREAM THEATER or FATES WARNING, and while there is plenty of evidence here that the band's sound has matured and evolved, this is still the same wickedly eccentric take on artful metal that was always so thrillingly hard to pin down. Devon Graves's unmistakable voice also sets the band apart, in this or any other decade, and his occasional forays into flute playing are more sublime than ever. But what really matters on this long-awaited comeback is the songs, and "The God-Shaped Void" is bursting at the seams with great ones.

Opener "Devils and Angels" is a dramatic, six-minute sprawl, with a monstrous chorus and a bubbling, psychedelic undertow: Graves sounds in his element, reveling in his reunited comrades' adventurousness, but still delivering a powerful, commanding vocal as riffs and symphonic crescendos erupt around him. "All the Bad Men" is a succinct prog metal anthem, like QUEENSRŸCHE in their late '80s pomp or NEVERMORE in goth-ballad mode, but with plenty of the underlying oddness that is a PSYCHOTIC WALTZ trademark. Guitarists Dan Rock and Brian McAlpin have snapped back into the same fizzing chemistry that made early classics like "Halo of Thorns" and "Nothing" so exhilarating back in the day, but these new songs are more accessible and yet far darker than anything the band released first time around. From a stately drift into twinkly-eyed prog territory for "Demystified" to the lurching, doomy and intermittently VOIVOD-like "Sisters of The Dawn", this whole record represents the triumphant rekindling of a once blazing creative relationship. On these stunning songs, all played with the kind of swing and soul that prog metal isn't really supposed to have, PSYCHOTIC WALTZ are blazing again. That's how you do a comeback.