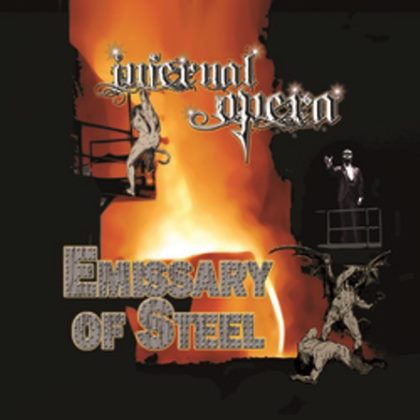 Pennsylvanian classic metal troopers INFERNAL OPERA are a work-in-progress. Their debut album "Emissary of Steel" rings like a weekend warrior project for a while before it becomes stacked with a bottom end of solid tracks. For certain, INFERNAL OPERA will take many people home to the days of BITCH, HALLOW'S EVE and even early SLAYER, which speaks well enough of them.

The band is founded by drummer/vocalist Michael Alberque, but really, INFERNAL OPERA is led by the dynamic vocals of metal newcomer Volpe Vetrano. Vetrano's frequently engaging ranges are plenty for the band to ride on, albeit they frequently dub layers of vocal tracks in the hopes of broadening their punchy songwriting schemes mixed between American and Euro power metal and in spots, mid-Eighties thrash. While the vocal heaping strategy works better in the second half of "Emissary of Steel", it nearly crashes the album in the beginning despite getting on the right foot with the banging title track.

Similar to EPICA pushing Simone Simons to the front with frequent death growling at her side, Volpe Vetrano's up and down pitches on "Infernal Human" are raped by demonic male rumbles. Worse is a rough collision with an aloof-sounding background vocal track in the later parts. They're designed to provide extra harmony, but unfortunately, they don't jive at all; they sound too alienated. At least the main chug of "Inhuman Being" will keep trad headbangers slamming along.

Vetrano's operatic training provides radiance on the mid-tempo pump of "Betrothed to Darkness", "Eden" and the closing number, "The Word". On the flipside, she carries much fang like she's delivering an estrogen-touched interpretation of Tom Araya on the speedy and sprawled "It". The would-be ploy to mimic King Diamond's high altos and plowing snarls on "Succubus" is a bit corny (as is the goofy mythological wallowing on "13th Sign") despite some cool thrash interjections. Volpe Vetrano may be a bit overplayed in the early going of this album, but later on is a different matter.

The 1:43 instrumental "The Garden's Gate" is the separation point where "Emissary of Steel" begins to gel. Randy "C.R". Gonce (ex-PURGATORY) and Aaron Celsus' wayfaring guitar lines meld with an overdubbed chorus that manifests once the composition amps up in the second section. It leads straight into the CANDLEMASS-esque doom stomp of "Eden". Together, a well-executed coupling with Volpe Vetrano sticking to mid-level pitch and fielding peppered background vocals that gel nicely this time.

As it takes a few hiccups before INFERNAL OPERA has their act together, it's the latter half of "Emissary of Steel" that shines and ushers a woebegone feeling of old-school Metal Blade and New Renaissance albums. The demonic shredding and razor-sharp guitar solos between Gonce and Celsus are a huge plus (they're freaking hellhounds on "It") and they hoist INFERNAL OPERA past their initial gimping. The stronger material of the second half allows their sparkling solos to sound as pro as anyone out there.

In all, there's a homebrewed, nostalgic charm to "Emissary of Steel" that's worth getting behind and rallying these diehards on. Their hearts are well in the right place and that's where it counts the most.