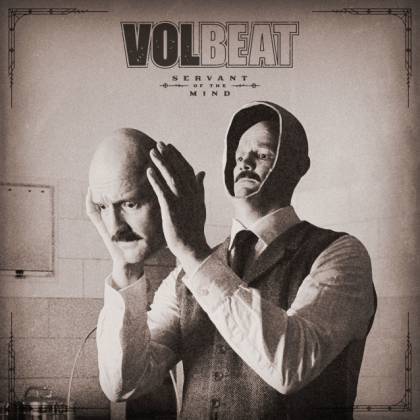 Servant Of The Mind

After 20 years, seven studio albums and countless celebratory live shows, VOLBEAT have become ubiquitous and much loved. The Danish crew's inspired musical formula has always seemed to come naturally, and whether fully immersed in the world of big metal riffs, or wistfully delving into rockabilly's ageless charms, VOLBEAT have always been a simple and unpretentious proposition. They have been consistent, too. 2016's slightly anemic "Seal the Deal & Let's Boogie" aside, every record has delivered some enduring anthems and gently tinkered with that formula. Two years on from the excellent "Rewind, Replay, Rebound", the eighth VOLBEAT album upholds those standards and is, as longtime fans have come to expect, another big, bombastic rock 'n' metal album with a tall quiff and an itchy trigger finger.

There is always time to win new converts, of course, but VOLBEAT have no reason to deviate too wildly from their chosen path. That said, "Servant Of The Mind" does feature some of the heaviest songs the band have ever recorded, alongside a smattering of moderate curveballs, all of which combine to make this feel like their most complete record yet. Even as they do exactly what you hope and expect they will, VOLBEAT sound refocused and newly pumped up here. "The Sacred Stones", "Becoming" and "Lasse's Birgitta" are all huge heavy metal ragers, albeit still always blessed with one of Poulsen's soaring vocal hooks. Recent single "Shotgun Blues" is less overtly heavy but still delivers a juddering punch: the sound of classic VOLBEAT with some fresh steroidal force coursing through its veins. Opener "Temple of Ekur" is as epic and overblown as its title implies, and is going to blow the roof clean off when accompanied by excessive pyro and the roar of a crowd.

Meanwhile, "Dagen Før" (featuring Stine Bramsen of Danish pop giants ALPHABEAT) is an unapologetic AOR banger, replete with made-for-radio, '80s production sheen. Almost indecently catchy and yet still powered by VOLBEAT's vision of electrified rock 'n' roll, it would have been a giant chart smash 40 years ago and may yet achieve that fate today. In contrast, "Step Into Light" is the album's spooked-out rockabilly rampage; with some exquisite twangy guitar and a dash of post-punk menace, it is a deft change of pace and one of the finest songs here.

Admittedly, if you were hoping that VOLBEAT would do something radical and completely overhaul their sound, "Servant Of The Mind" is not the album for you. It will be, however, the album for a vast number of other people, as Denmark's kings of rockabilly metal continue to stand alone, pockets bulging with massive, life-affirming tunes. The shows will be wild.