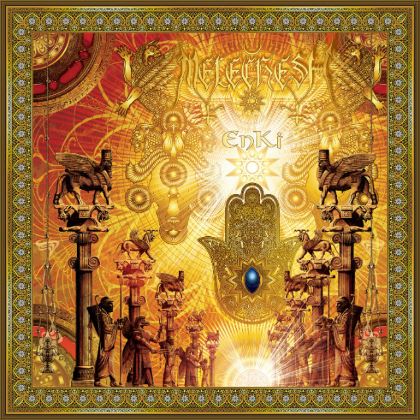 It's been five years since the Assyrian black-metal troupe MELECHESH (translated from Hebrew as "King of Fire") last put out an album. Though comparisons to NILE have followed these guys around forever, MELECHESH proved on 2006's "Emissaries" and 2010's "The Epigenesis" to have their own vibe, which is cultivated of Middle Eastern tones amidst their thrashing Mesopotamian/Sumerian occult themes.

Over the past two decades, Ashmedi has watched his band dismantled, reassembled and dismantled again over reasons ranging from dismissals, members being drafted or pursuing academics. No stranger to adversity, he was forced to relocate from the band's Jerusalem homeland to Amsterdam over religious conflicts. Ashmedi and MELECHESH built their respected standing in the metal underground and the band returns this year with another winner, "Enki".

Enki is a Sumerian god of crafts, water, wisdom and mischief, and MELECHESH builds their latest album from his reputed deeds. Enki, frequently depicted with the Euphrates and Tigris rivers rushing from his shoulders, is considered a god of life and replenishment. Enki is attributed in the Legend of Atrahasis as having helped save humanity from a wipeout deluge in an epic foil against his half-brother Enlil, the Sumerian king of the gods. Enlil found humans to be a noisy, irksome race that disturbed his sleep, so the myth goes. Thus you have the set stage for MELECHESH's extensive black-metal sonnet.

The 6:32 "Tempest Temper Enlil Enraged" is a well-plotted journey of black-metal mayhem that's wrung together as tightly as you could hope for. Drummer Lord Curse's unrelenting double hammer pilots the course for Ashmedi and Moloch's melodic guitars and Scorpios's roving bass. The song is angry and violent, befitting of the title, yet MELECHESH's attention to detail and melody provides the necessary undercurrent to keep the song engaging.

The remainder of "Enki" is a switch off between shorter and widespread compositions. "The Pendulum Speaks" is a four-minute mid-tempo pounder hailing more rock orientation than speed-slung char, no matter how serpentine Ashmedi's vocals are. Ditto for "Multiple Truths" and "The Palm, the Eye and Lapis Lazuli". The much faster "Lost Tribes" clocks in at 6:18, and MELECHESH requires patience as they later take the listener through successions of eight-minute mini epics with "Enki Divine Nature Awoken" and "Doorways to Irkala", then a near-thirteen minute finale, "The Outsiders".

The Middle Eastern garnishments that have marked MELECHESH come mostly in rivulets and accents, such as when kicking off "Tempest Temper Enlil Enraged", "The Palm, the Eye and Lapis Lazuli" and the tremendous "Enki Divine Nature Awoken". In the case of "Doorways to Irkala", it's eight minutes of soothing percussion, sitar and saz. Largely, they appear as storytelling marks to remind the listener from where MELECHESH derives "Enki"'s narration, and they drop them in pockets (along with shuddery fugue chants) on the longer tracks for the same reason.

While "Enki" is an indulgent project reflecting a stacked burst of creativity following the long interim since "The Epigenesis", Ashmedi proves himself not only resilient but also wise in bringing back Moloch and Lord Curse. The addition of Scorpios provides a deeper bass reach than ever before and the band's playing might be the firmest they've ever sounded. The interest in fusing more rock and trad metal measures into "Enki" giving it depth and groove, which allows the listener to hang with it. When this album speeds, it rockets, particularly on "Metatron and Man". When it just wants to rock, it freakin' rocks.