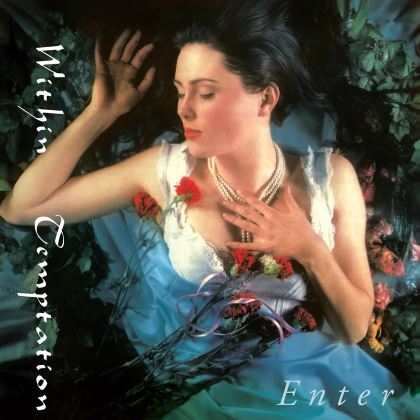 Goth metal favorites WITHIN TEMPTATION are riding high from their well-received though somewhat controversial "Hydra" album released earlier this year. Robert Westerholt has laid behind the scenes for the past couple albums as a studio musician in order to focus on his children shared with primary vocalist Sharon den Adel. Accordingly, Nuclear Blast is offering a glimpse back to when Westerholt and den Adel founded WITHIN TEMPTATION, reissuing the band's debut LP and follow-up EP from 1997 and 1998 respectively, "Enter" and "The Dance". If you own these already, you're getting nothing new except for a touch-up of the original masters. If you're only recently coming to WITHIN TEMPTATION and looking to stock your collection, this is an efficient way to catch up.

"The Dance" came behind "Enter" as a five-track EP with three originals and remixes of "Restless" and "Candles & Pearls of Light" from its predecessor. However you view WITHIN TEMPTATION, what can be said is the frequent gloominess of their early output showed promise of something that became accredited more to NIGHTWISH, EPICA and even EVANESCENCE. WITHIN TEMPTATION, along with their fellow Dutchmen and women in THE GATHERING, was more of an insider's secret until both acts found broader audiences in the early 2000's. THE GATHERING being around longer than WITHIN TEMPTATION, it's been fun watching the strange but ultimately prolific evolution of these groups.

"Restless" from "Enter" parades the luxuriant tapestries WITHIN TEMPTATION have routinely draped over their melancholic, sometimes explosive music. The slow dancing piano melody acts as a soft processional for Sharon den Adel to gently nudge her mezzo-soprano peals into. "Restless" escalates upon a winding bass path, trailing to guitar-pounded choruses. At this point in the band's history, we're hearing them still putting things together, thus "Restless" is a hair rough in comparison to their future work. Sharon den Adel raises her octaves along the song's journey and she's something to behold, even if she is still mastering her control here.

By contrast, the much heavier title track is one of the earliest exhibitions of the "Beauty and the Beast" theme that has become part and parcel of symphonic metal. Robert Westerholt's demonic growling pocked across the broiling metal blasts are secondary and swept nearly clean off by Sharon den Adel's angelic swoons. No matter how dense the tones of "Enter" get, den Adel acts as conscience over the whole thing, even if the slow crunch and the orchestral-intended synth plugs sound cautious as the instrumentation takes over for the conclusion of the 7:16 track.

The gorgeous, string-plucked intro for "Pearls of Light" is another practical entrance for Sharon den Adel to sashay into and in this section she sounds as confident as anything she's ever recorded. WITHIN TEMPTATION weaves a lullaby with placating synths, strings and reverberating chimes, creating an illusory sense of peace before stamping down the distortion. den Adel's panting note dances on the bridge are a mite hokey, but when set free, she's majestic even at this early point in her career. As with the first two tracks of "Enter", WITHIN TEMPTATION bludgeons the preceding song with a charring bit of nastiness. In this case, "Deep Within" employs the same scheme as "Enter" with the ralphing dregs taking precedence over the absent Sharon den Adel, pitting Robert Westerholt against choral samples. While maintaining the same dragging tempo as the rest of the album, "Deep Within" lets ugliness prevail with its manifest rumbling and up and down chord chunks.

The fugue-based "Gatekeeper" takes three-and-a-half minutes of varying arrangements before Westerholt's demon vocals reappear. The first two minutes ring of sadness like a distant admirer of Pino Dinaggio's score to the original "Carrie" (specifically the spot where the house burns to embers) before the band embarks upon a power metal march and effectively ushers the song to Sharon den Adel at the five-minute mark. She receptively smothers the downcast devil yowls as the band finishes the track strong.

"The Dance" goes no faster than the "Enter" album, but there is a far more sinister feel as Sharon den Adel darkens her palette to match the clobbering drum rolls and blaring chords around her. The expectant death snarls burp into play and just when it feels like den Adel is going to surrender to the song's blunt malice, she soothingly changes her tone to override it. She holds the key to sanity over the prevalent danse macabre swirling about the song, vocally offering a tender hiding spot amidst such a dismaying overture. "Another Day" spools one of the most dejecting courses WITHIN TEMPTATION has ever laid out, but it's Sharon den Adel who naturally shines a graceful light amidst the grueling slog. At times, the song is stunning as it is despondent. The brisker and heavier march of "The Other Half (of Me)" rounds up "The Dance"'s originals on a comparatively buoyant note as Sharon den Adel asserts herself over the growling and epic-driven instrumentation.

While "Enter" has many verdant assets as one of the building blocks of modern symphonic metal, it's unstable in spots and unsettling on occasion. Consequently, "The Dance" conjures some of the heaviest and most desolate tones this band has ever projected. Put together in one package, you'll want to keep something more up-tempo at easy reach afterwards. The few complaints to be had about "Enter" and "The Dance" are underscored by the point any band should sound as capable in their formative years as WITHIN TEMPTATION did.