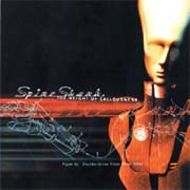 The Height of Callousness

Having perfected their chops while part of the same Southern California scene that spawned the likes of COAL CHAMBER, STATIC-X, SYSTEM OF A DOWN, and THE DEADLIGHTS, SPINESHANK have kept a comparatively low profile and were not rewarded with nearly the same type of commercial success that the above-mentioned groups achieved with their initial releases. On their second album, SPINESHANK appear to have toughened up their act and sharpened their songwriting skills, with the bulk of the 11 songs on the offer coming across as much beefier and catchier than anything on the quartet's Strictly Diesel CD.

Although SPINESHANK are still, for the most part, treading previously charted territory, the group's increased emphasis on vocal hooks and a more cohesive songwriting approach have resulted in a dramatically more mature sounding effort, with "Synthetic" standing as by far and away the most infectious song the band have written to date. Elsewhere, the title track pushes forth with the kind of unadulterated intensity that is rarely heard from the quartet, while "Cyanide 2600" revolves around a more electronic, industrial feel that is notably devoid of the melodic passages that characterize most of the rest of the album.

If there is one criticism that I could offer, it would simply be that the mixing job of Scott Humphrey appears to have given the guitars an overbearingly harsh edge that makes the listening experience an unnecessarily trying one, especially at louder volumes, which conflicts with the more accessible nature of most of the material. Having said that, this is a relatively minor flaw that should have no bearing on the band's ability to make a significant commercial impact with this thoroughly excellent effort.