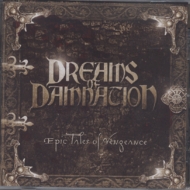 Say It In Blood

Hold on, let me get this straight. You've got a California-based thrash band, with a bona fide metal legend on guitar, and a good-looking, leather-lunged female vocalist? And the vocalist works for a premier metal label? And said label hasn't snapped up this band and sent them out into the world to do some damage? Is it time to change the hearing aid batteries at corporate HQ?

DREAMS OF DAMNATION are not a new band, although you'd be forgiven for thinking so — their last release, on the perpetually underfunded Necropolis label, was "Let the Violence Begin", six years ago. Since then, former DARK ANGEL riffmeister Jim Durkin has recruited an entirely new lineup, including vocal titan Loana DP Valencia, and allowed just about zero modern influence (aside from her death-tinged rasp) to pollute his chunky, speed-picking Bay Area riffage.

"Beyond Salvation" may flirt with ARCH ENEMY styled modern-day thrash, but don't look for nearly as much breathing room on the rest of "Epic Tales of Vengeance". "The Bloodletting" is a ruthless riff steamroller, with Valencia's vocals front-and-center, almost too loud in the mix, tearing off heads with a midrange growl. "Patricide" is as punishing as anything on the new EXODUS, a nonstop barrage for two bruising minutes, about ten seconds to catch your breath, and right back into the maelstrom. This is the kind of song that causes whiplash!

I'm not totally sold on the drumming, as it occasionally strikes me as obtrusively busy, detracting from the rest of the band's well-oiled killing machine. It's a minor quibble, though, because the stars here are the vocals and Durkin's seemingly endless arsenal of killer riffs, tossed around with a gluttonous abandon that makes it all look so easy (remember, this man's former employers capped off their career with an album — "Time Does Not Heal" — that boasted nearly 250 riffs). Nothing here sounds dated, but I defy any headbanger worth their salt to not headbang uncontrollably when "New Flesh" kicks in!

This is unapologetic American thrash fucking metal, devoid of any half-assed attempts at modern-day credibility or scene assimilation. DREAMS OF DAMNATION kill on their own terms, and they stand among a proud few still clutching the banner of pure, unadulterated, riff-dominated, polka-beat, bang-the-head-that-doesn't-bang thrash! If this doesn't get your blood moving, you're already dead. Next time, though, how about a couple more tunes?