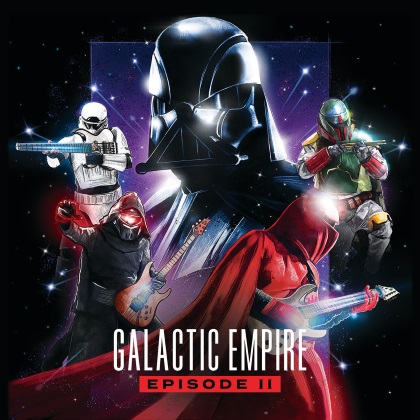 01. March of the Resistance
02. Scherzo for X-Wings
03. Hyperspace
04. The Droid Invasion and the Appearance of Darth Maul
05. Kylo Ren Arrives at the Battle
06. Love Pledge and the Arena
07. Rey's Theme
08. The Departure of Boba Fett
09. The Emperor
10. Into the Trap
11. The Battle of Yavin (Launch from the Fourth Moon)

What if BETWEEN THE BURIED AND ME and John Williams met up at a "Star Wars" premiere after party and, after an unlikely brodown, agreed to collaborate for shits and giggles?

GALACTIC EMPIRE was formed by CENTURY's Carson Slovak and Grant McFarland—you probably tripped over GALACTIC EMPIRE in 2016 while laughing yourselves silly at MAC SABBATH and "The Simpsons" tribute band, OKILLY DOKILLY. If it's your first encounter, GALACTIC EMPIRE is a prog metal quintet sporting a Sith's saber-sized hard-on for "Star Wars". Dressing up onstage as the band’s own versions of Darth Vader, Kylo Ren, stormtrooper infantry, crimson guard and Boba Fett, it's neither unnatural nor unexpected that GALACTIC EMPIRE is Force fanatic prog boasting a garrison's worth of flog.

Let's face it, a metalled-up hike of "March of the Resistance" from "The Force Awakens" with tempo spikes that John Williams hardly intended is just plain goofy, much less the whirligig guitars and agro chords. Yet there's a dweeby charm—if you like metal, anyway—to the thing, and the playing is so razor sharp that you can't help but marvel at the sheer balls of it. That being said, "Scherzo for X-Wings" is more like for X-Box since it would be perfectly fitted for a video game created by jacker operatives working the same cheapskate market supporting offshoot Lego peddlers.

If you find yourself mesmerized by these two-minute blasts, then you're ready for more than five barraging minutes of sensory overload flung at you on "Hyperspace". GALACTIC EMPIRE hoists the flurry of John Williams's score behind the Rebels' search for the stranded Han and Luke on Hoth, dropping nudges of the "Imperial March" for good measure. GALACTIC EMPIRE gives only a minute pause to drop the main "Star Wars" theme while melting ear canals with ridiculously fast scales and blast beats.

The hippest number on this album is "Rey's Theme", and given the sequence's (much less Daisy Ridley's) immediate popularity with a new generation of "Star Wars" fans, GALACTIC EMPIRE playfully swings its ode into a rally jam. For the old-dog legion, "The Departure of Boba Fett" is an extensive interpretation using a medley of Cloud City passages from "The Empire Strikes Back". That being said, GALACTIC EMPIRE's abrupt slowdown using misty synth aqueducts is quite inventive. At nearly six minutes, the progressions get a bit too geeky and sluggish, but the payoff is well worth hanging for. On the flipside, 8:40 seems hardly enough for the genuinely impressive "The Battle of Yavin (Launch from the Fourth Moon) ", a faithful recreation of the first Death Star attack in "A New Hope".

If there's one track John Williams composed in his "Star Wars" canon that's the most metal at heart, it's the doom-laden mantra of "The Emperor" from "Return of the Jedi". GALACTIC EMPIRE conjures a veritable tornado behind Williams's wonderfully creepy fugue for Emperor Palpatine with a rumbling finale, accented by a whisper of Luke Skywalker's theme, to smash it home.

May the Fourth be with you is a holiday for cosplayers, Force fantasists and the release of GALACTIC EMPIRE's gonzo but frequently fun "Episode II". The band vows—like James Earl Jones did behind the towering guise of Vader, and animated by David Prowse—there'll be no one to stop it this time.