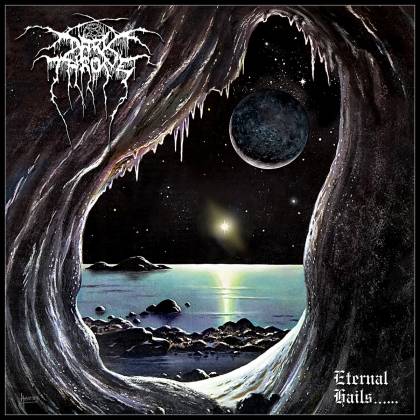 DARKTHRONE is indisputably one of the most important bands in the history of black metal. The trailblazing Norwegian act was at the forefront of the second wave of black metal, initially blowing minds with the fantastic and absolutely seminal 1992 release "A Blaze in the Northern Sky", which followed the unit's death metal-driven debut, "Soulside Journey", which was released just one year prior. Though the band will always be known for its template-setting pure, raw black metal period, it has produced quality material that has branched out to include different textures and heavy music styles ranging from speed metal to hardcore punk and crust. DARKTHRONE continues to belch deep from its filthy, old-school Norwegian black metal lungs whilst embracing key facets of epic heavy metal and doom metal on its latest effort: "Eternal Hails……".

This go around, the demonic, dynamic duo of Fenriz (drums, lyrics) and Nocturno Culto (guitars, bass, vocals) has anointed its latest batch of songs as being "epic black heavy metal," an apropos and on-point description, to be sure. Fenriz recently mentioned that his passion for bands that wrote lengthier songs has existed since he was a kid, name-dropping bands like URIAH HEEP and METALLICA.

"His Master's Voice" opens the album with an odd, pseudo-gothic atmosphere which makes way for some inspiring speed metal cacophony. The guitar work is significantly more saturated and distant sounding than on previous records — presumably due to the band's use of a more traditional studio, Oslo's Chaka Khan Studio, rather than its own primitive studios used for previous efforts. "Hate Cloak" follows up with the clearest representation of Fenriz's passion for epic doom metal, filtered through DARKTHRONE's evil, grimy prism that is, of course. The repetitive riff work is engaging, but it runs excessively deeper into the song.

The Norwegian black metal band that we once upon a time assumed may never change has done exactly that as the years have passed. Given deeper consideration, if the band was to continue, which it has, the stylistic changeups were inevitable. In the same way that NAPALM DEATH wouldn't have continued upon their remarkable path had they attempted to regurgitate "Scum" and "From Enslavement to Obliteration", so too would DARKTHRONE have been doomed to becoming a caricature of its former self had it unimaginatively recycled early to mid-nineties classics like "Under a Funeral Moon" or "Transilvanian Hunger". (Some motifs from the new song "Wake of the Awakened" do sound reminiscent of "Transilvanian Hunger", however.)

But while expansive creative ambition is admirable, that doesn't mean that faint praise is mandatory. Yes, DARKTHRONE has proven itself a formidable force in the realm of punk-fueled black metal, but by and large, too much of the darkness has dissipated over time. At its peak, in the earlier part of the nineties, DARKTHRONE wielded repetitive, melodic riffs that verged on the point of melancholy but eventually sunk into a cold void of pure misanthropy that was absolutely insane. But similar to the manner in which the (black) magic left the building for the mighty SLAYER following its covers album "Undisputed Attitude", the same has happened, at some point, for DARKTHRONE. Sure, "Eternal Hails……" is an enjoyable dark metal album inspired by epic doom and traditional heavy metal, but DARKTHRONE unfortunately does not make the mesmerizing albums of yore.