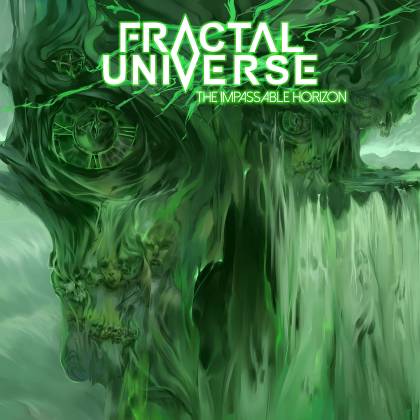 Increasingly one of the most exciting bands to operate under the progressive death metal banner, FRACTAL UNIVERSE sound more creatively liberated than ever on their third full-length. Still intermittently brutal and chaotic, but focused far more on soaring, ethereal melodies and deftly woven arrangements, the French quartet have really hit their stride here. "A Clockwork Expectation" is a grand example of the band's still-mutating strain of technical clangor: part swirling, windswept prog metal, part crushing, deathly riff-maze, it offers a superficially familiar hybrid, but FRACTAL UNIVERSE's songwriting chops raise everything to a more nourishing level. Opener "Autopoiesis" establishes this more melodic and sonorous approach beautifully, but it's "Interfering Spherical Scenes", with its tantalizing echoes of KATATONIA and CYNIC, that clinches the deal and sets the tone for an album where pitiless precision and raw emotion coexist and evolve in harmony.

Several steps forward from 2019's "Rhizomes of Insanity", "The Impassable Horizon" endeavors to reimagine its creators' relatively straightforward technical metal blend as something more expansive and versatile. Songs like "Symmetrical Masquerade" and "Withering Snowdrops" suggest that FRACTAL UNIVERSE are now a prog band with death metal tendencies, rather than the other way around. It's a subtle shift, but it's one that suits them perfectly.

The most startling moments arrive when the Frenchmen employ their full arsenal of dynamics and diverse ideas. "A Cosmological Arch" is a master class in smashing haunting melody and polyrhythmic bluster together with some righteous and weirdly soulful lead work and numerous impactful twists and turns to keep your ears pinned back. Even better, the closing "Godless Machinists" takes a sumptuous eight minutes to cast its multifarious spell. Waves of dewy-eyed melancholy wash over an irresistible syncopated shuffle before all hell breaks loose and FRACTAL UNIVERSE plunge into extremes of brutality and tranquility for the song's steady descent. A closing, acoustic take on "Flashes of Potentialities" is a nice touch, too. Originally from "Rhizomes of Insanity", the song was an early indicator that the band were immersed in more artful pursuits than their earliest recordings suggested. "The Impassable Horizon" plainly ticks a whole bunch of boxes for fans of THE FACELESS, OBSCURA and GOROD but simmering beneath the surface of these eyeball-rattling mini-labyrinths is something deeper, darker and eminently more enduring. Their next album promises to be a monster.