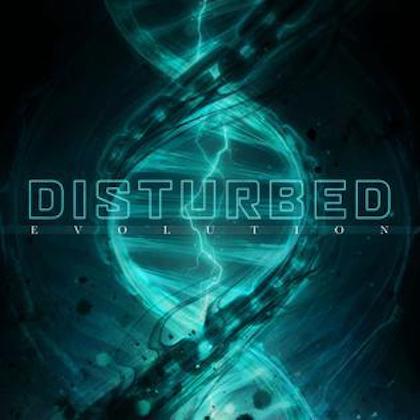 When you title a body of work "Evolution", the subtext implies something of an anthropological nature or a systematic process of moving forward—in this case, a band. DISTURBED serves itself a tall order for its seventh album, "Evolution", which vocalist David Draiman has reputedly cited as the band's "Black Album". If DISTURBED is to be remembered for anything as iconic and commercially successful as what METALLICA staked in 1991, that moment already passed in 2000 with "The Sickness". Depending on your taste, such a claim is subjective if not outright pretentious.

Which is not to say artists shouldn't seek to challenge themselves and grow; "Evolution" is more a buzzword in this case. The album gives DISTURBED the opportunity to vent its grief about the recent passing of contemporaries Chester Bennington, Chris Cornell and Vinnie Paul. While there are no cover tunes this time, though a live version of the group's SIMON & GARFUNKEL"The Sound of Silence" cover featuring Myles Kennedy appears on the deluxe edition, the band reportedly dialed in to a lot of classic rock before recording "Evolution". If this is true, the results are approximate at best.

"Are You Ready" is a catchy enough opener, floating on the trail of a purring synth pulse and Moyer's bass lobs. If you're a fan of Draiman, you'll immediately groove to his summons. Perhaps the song could've used a heavier blast on the choruses instead of the placidity checking them down, but DISTURBED loyalists will get their fill nonetheless.

Any classic rock feel to be grabbed from this album is had in doses, first with the hoisted march of "No More". Here DISTURBED nabs licks from both the seventies and eighties, setting things off to a happy bob while predicting the ultimate demise of a politically bankrupt society. There's a love for LYNYRD SKYNYRD blaring through the digi-skulk of "Stronger on Your Own", scoring points for its positive message of self-empowerment, yet the song falls flat upon a suggestion of intensity that is never revealed.

The numerous soft touches on "Evolution" show DISTURBED's tender mercies, which can be both intriguing and disarming. Draiman sweeps most of the grit and gravel from his pipes on the ballads "A Reason to Fight", "Already Gone" and "Hold On to Memories", the latter ringing close to country turf. Dan Donegan decorates them with appealing acoustic spools and piano (a guest violinist appears on "Memories"),yet it's up to the listener's patience level if they can hang where DISTURBED is these days. For good measure, how about another mopey ballad on the deluxe edition, "Uninvited Guest"? Evolved or pale shade, you be the judge.

The James Bond knock behind the primary riffs on "In Another Time" begs MGM for a crack at opening theme honors to the 25th outing for 007, at the same dialing up the quartet's own playbook from "The Sickness". By the time the pedestrian proto-rocker "Saviour of Nothing" appears, though, a lagging feeling to this album lingers, despite Draiman's willful snarls.

His most pleasing tones manifest on "Watch You Burn", hardly indicative of its implied nastiness; it's much closer to eighties adult contemporary ala Dan Fogelberg with a minute rocker's touch. "The Best Ones Lie" finally kicks up a fuss with some toothy riffs and Draiman dropping more "goddamns" than a heathen barfly on football Sunday. Yet the hopeful ruckus to "The Best Ones Lie" only shows up with Donegan's rowdy guitar solo, drifting into a listless gimp serving up the closing whisper of "Already Gone".

Sorry, but a "Black Album" for this generation has yet to be made, though AVENGED SEVENFOLD is likelier to hit that mark than DISTURBED, which can at least be applauded for trying to shake up its sound. Unfortunately, the group's path toward dynamism on "Evolution" is bogged more than blazed.