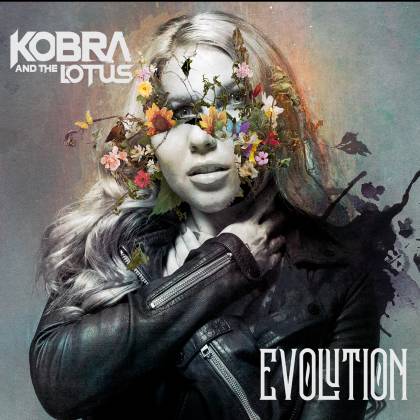 KOBRA AND THE LOTUS

Standard bearers for hard work and determination, KOBRA AND THE LOTUS have taken a decade to finally reach a level of success and acclaim that their early potential hinted at. Their first efforts for Napalm Records, "Prevail I" and "II", emerged in 2017 and 2018 and showcased a greatly improved band with fistfuls of great tunes. Vocalist Kobra Paige's talents have never been in doubt, but it wasn't until the "Prevail" albums that her band established an identity strong enough to match their frontwoman's charisma. Everything seems to be going extremely well at this point, of course, and so "Evolution" necessarily sounds like the work of a band with the wind in their sails and several large sacks full of confidence.

In musical terms, we're firmly in bombastic but radio-friendly alternative rock territory, albeit with plenty of bona fide metal crunch underpinning it all. It reaches a peak of efficacy on "Thundersmith"; a song that would have been a colossal hit had it emerged in the glory days of PAT BENATAR, and which still deserves to be a colossal hit now. Admittedly, this is very heavily produced and sonically immaculate stuff: it all sounds very expensive and ruthlessly ambitious, and yet the songs themselves all dwell on the right side of cliché, with just enough overall variation to make this stand apart from the alt-metal pack. On the surface, "Circus" is a straightforward slow burner, but there are countless mischievous intricacies in the riffs, a dash of clownish menace and some sumptuous harmonies from KOBRA. Similarly, "Wash Away" starts with gentle ripples of Mellotron and dreamy acoustic guitars, before slowly morphing into a swaggering, melancholy metal waltz. In truth, nothing here is going to blow your mind, unless you've lived in a remote cave for the last 20 years, but KOBRA AND THE LOTUS have audibly reached a new level of songwriting intuition, and they sound convinced and convincing as a result. At their most upbeat and aggressive, as on the opening title track, the Canadians sound briefly committed to following a more metallic path, but it's the giant, undeniable melodies and KOBRA's lightly borne vocal versatility and power that seal the deal.

Shrewdly hovering somewhere between symphonic metal, alt-rock and something more direct and brutal, songs like "Burn!" and the enjoyably incensed "Get the Fuck out of Here" are superficially straightforward, but their creators' clever arrangements, deft harnessing of technology and knack for theatrical pomp are simmering just below the surface. The only disappointment is that KOBRA AND THE LOTUS rarely explore their weirder ideas. "Wounds" begins with a hint of lysergic raga rock, but soon reverts to a steady four-the-to-floor thump, while "Liar" sounds like a cross between MICHAEL JACKSON's "Beat It" and any number of LORDI anthems, but never quite exploits the oddness of that aesthetic clash, instead sticking to a likable but predictable AOR anthem template.

But a few minor misfires aside, "Evolution" is a strong move forward for a band with a not-so-secret-weapon who almost certainly could sing the birds from the trees.