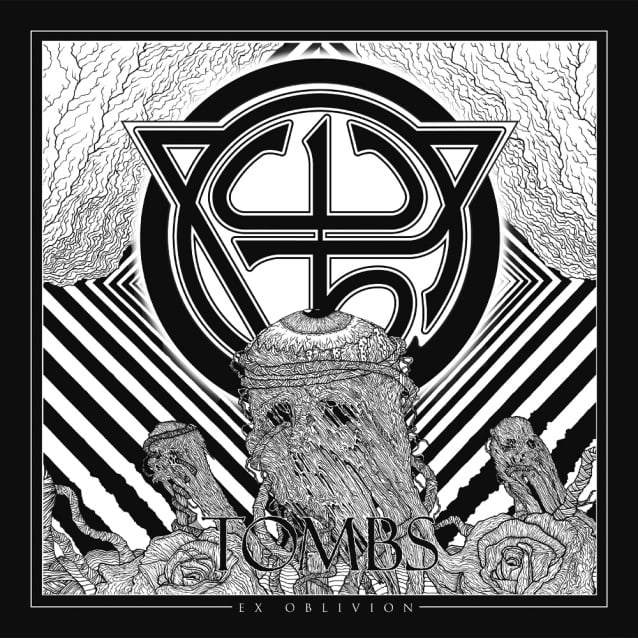 Always interested more in embarking upon a singular dark musical journey rather than strictly adhering to any strict playbook's rules, TOMBS' focus is on a left-field approach toward revelatory musical expression instead of mind-numbing allegiance to tired tropes. The Brooklyn-based act returns with "Ex Oblivion", a five-song EP including new music, a remixed track and a couple of interesting covers. While the release may tide fans over between full-length albums, there's little surprise that TOMBS has yet again doled out music that matters.

The unit's ongoing creative depth makes sense considering that its driving force, frontman Mike Hill, is a workaholic who remains active in a broad array of endeavors. Though he was previously known for his work with ANODYNE, Mike's musical resume includes OTIS, KING GENERATOR, VERSOMA, SCORPION THRONE and VASILEK. What's more, he has his own coffee company; he's involved with several music and horror podcasts; and he's a print and online journalist. His creative depth and energy shine brightly throughout "Ex Oblivion".

The haunting, opening title track, inspired by the H.P. Lovecraft story of the same name, is informed musically by goth rock as much as it is by black metal, merging hard-hitting rhythms, soul-stirring guitar melodies, Hill's venomous black metal screeches and his Andrew Eldritch-esque melodic vocals. TOMBS' interesting take on MOTORHEAD's classic "Killed By Death" follows. It's true to the original, though it sounds completely different because TOMBS works from an entirely different kind of template. And if that song doesn't sound as though the uber dank TOMBS is actually having fun, the GG ALLIN cover, "Commit Suicide", strikes with an even more upbeat attack, in spite of the ironically counterpointing nihilism inherently tied to the source song's thematic backdrop. Interestingly, the ghost of CARNIVORE-era Pete Steele comes through Hill's delivery here.

If those selections weren't ambitious enough and successfully pulled off, TOMBS reaches further with the remix of "Sombre Ruins". The song originally appeared on the 2020 full-length "Under Sullen Skies". Now titled "Sombre Ruins Nothing Remains (RKGD Audio Remix)", Hill's longtime friend Alap Momin (aka Oktopus, formerly of experimental/industrial hip-hop outfit DALEK) takes the song to a different level entirely, one colored by a foreboding electronic soundscape. The song segues seamlessly into the EP's finale, "Murder Legendre", a minimalist sonic experience built upon an eerie and addictively repetitive keyboard sequence and deep, spoken-word vocals.

TOMBS' genre-defying nature is simply a given considering its output over the last 15 years. But with "Ex Oblivion", the experimental band ups the ante on what they were doing before. Sure, the hybrid of black metal, post-metal, sludge and post-punk remain, but the goth rock and industrial touches have never been so obvious.