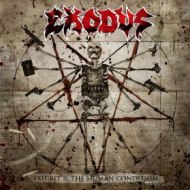 Exhibit B: The Human Condition

Blame it on the lingering spectre of "...And Justice For All" as some kind of alleged benchmark for an album's importance. Or perhaps it's a defense mechanism in the sleep-deprived brain of Gary Holt, feverishly obsessed with fighting off the advances of age and topping himself with intensity every time out. EXODUS apparently believes that if they don't attack with the hammer down for every possible second of their record, and if their record isn't as long as is technologically feasible, they've somehow failed you, the listener, and pussed out. The end result is kinda like being in the mood for a hamburger, and instead having a fat, cranky man in cutoff sweats tackle you, cram a firehose down your throat, and force feed you six or seven pounds of high-pressure ground chuck.

That said, there's a lot of high-quality stuff on "The Human Condition". The first two songs crash out of the gate with intense, pit-friendly riffing and a full-throttle enthusiasm that makes it impossible to stay on the sidelines. When EXODUS is on point, there's just no stopping them, no matter what year it is — echoes of their back catalog linger throughout these songs, with singer Rob Dukes occasionally channeling a fair bit of that old-style Zetro snarl. While there seems to be a little less twin-guitar action than back in the days when Holt had Rick Hunolt as a sparring partner, Lee Altus more than steps up in both the soloing and songwriting department (he wrote the opener, arguably one of the album's best tracks). And Tom Hunting remains a lethal force on the drums, his fills crashing down like cannon shot all over these cuts.

Basically, at this point, you know what you're gonna get from an EXODUS record, and the post-reunion incarnation of the band has always delivered — an amped-up, no-surprises modern take on their classic downpicking thrash, with overclocked Andy Sneap production and enough fuck-you attitude to pick (and win) fights with bands half their age. The sheer vein-popping force of the whole overbearing thing is kinda the point of its existence, and that works — Christ knows we don't need the band slowing down or softening up. But at some point, they'd be better off culling a coupla weaker songs (I nominate "Hammer and Life", the sort of midtempo, groove-metal, alpha-male EXODUS-guide-to-living cut these guys have never been any good at, and the long and dreary "Nanking"). At 45 or even 50 minutes, this record would have been an unquestionable bruiser; at 72, it's just fatiguing.

Do I recommend it? Hell yes — "The Ballad of Leonard and Charles" and "Beyond the Pale" alone would be worth the price of admission, and even a subpar EXODUS song usually has at least one good riff or line to make it worth checking out. Do I recommend sitting through all of it at once? Not unless you want to OD on thrash and numb yourself for the rest of the week. EXODUS, despite all the years of lineup instability and turmoil, remain the undisputed heavyweight kings of Bay Area thrash metal, no question, no room for doubt. I know it, you know it, little old ladies on the shuffleboard court know it. I just wish EXODUS knew it, and didn't feel the need to try so hard to prove it that they ended up turning a killer record into too much of a good thing.