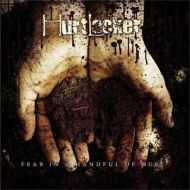 Fear in a Handful of Dust

One moment while I Q-Tip the blood out of my ears. There we go. So why does it take a label in Austria to sign a fearsome thrash-beast from Chicago when said band has been in our midst since 2000? For shame U.S. labels, you've missed a golden opportunity to sign a band called HURTLOCKER, one that is capable of inflicting damage comparable to the likes of DEW-SCENTED and THE HAUNTED. In an attempt to preempt those sure to break into bouts of whining like a small child that has been forbidden from eating a second cookie before dinner, let me clarify the term "comparable;" used in this context. It does not mean that "Fear in a Handful of Dust" is on par with, for example, "rEVOLVEr". It is an acknowledgement that HURTLOCKER is cut from the same cloth and is not to be taken lightly. How appropriate that Napalm fills the smoldering crater left by BELPHEGOR with an equally vicious act.

The fact that HURTLOCKER's style of pain producing thrash is not far removed from what the aforementioned bands have already created is largely irrelevant. There will always be a place in the blackened hearts of extreme music fans for the non-stop speed and aggression of an act like HURTLOCKER. Though not at the same songwriting level, many of the same utterances (e.g., "holy shit", "fuck!" etc) fell from my lips in listening to STAMPIN' GROUND's "A New Darkness Upon Us". You can't fake this kind of intensity and malicious intent. Snagging Zeuss (HATEBREED, SHADOWS FALL) for production duties surely upped the fear ante from what it would have otherwise been.

So as Grant Belcher screams until blood shoots from his empty eye sockets and Tim Moe leaves your eardrums gouged and permanently damaged from the riff volleys, remember that it's only a metal band. The nightmares and seizures will eventually go away. It was still worth it though, wasn't it?