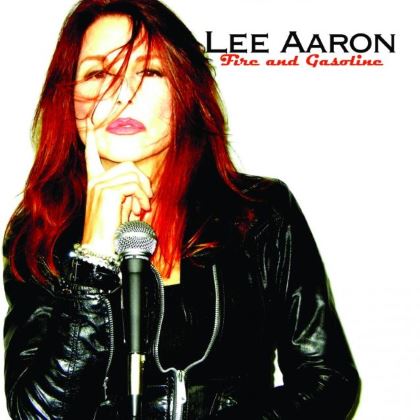 In a recent interview I conducted with rock legend Lee Aaron, she's all but renounced the young, exploited sexpot broiling throughout 1982's "Under Your Spell" video. While Aaron remains fond of the song itself today, she told me, “In terms of the video, that was shot on one day of my life which became a legacy for me to live down over the next several years.”

Parenthood will change most people, even metal queens. It's been more than twenty years since Lee Aaron has put out a rock album, the last one being 1995's "2Preciious". In the time since, Lee has devoted her time to jazz and raising her little ones. Her daughter appears with a batch of her friends as a proverbial backup band in the video for the album's first track, "Tom Boy". It's a cutesy, family-friendly video with a glasses-strapped Mama Aaron announcing herself back in the game. This time without the boustiers, big perms and body rocks.

Collaborating with author and CRASH KELLY guitarist Sean Kelly, "Fire And Gasoline" is going to strike the right chord with some and unfortunately swing a beacon of animosity from others. Already the reaction to the peppy and innocuous "Tom Boy" is mixed. Lee Aaron, however, retains the chip upon her Canuck shoulder that made her a global rock dynamo everywhere except the United States. Aaron, along with Betsy Bitch, never received her full due in America, yet the lady has no regrets about her career path. Nor does she shy from doing what suits her, which these days is a safe mold of blues and classic rock, along with an acute case of beach party bingo. Obviously a far stones' throw from "Metal Queen", "Call Of The Wild" and, for that matter, "Some Girls Do", but one cast in the right direction.

The title track is a riff-plugging, organ-whumping blues rocker that lights up during the last section with Lee Aaron's climbing vocals and Sean Kelly's smoldering guitar solo. "Wanna Be" plays a trick with a sultry jazz intro where Lee Aaron exhibits a mature swoon about “unrequited love being like the ember of a fire that never dies in dark disguise” before bouncing a full one-eighty into a breezy pop rock number. Lee pines like the teenager she might've wanted to be prior to "Under Your Spell", where she “wants to be the sweat upon your sheets, the pillow when you sleep…the lemon that you squeeze and the answer to your pleas”. Like "Tom Boy", it's purposefully cute and reminiscent of the 1960s girl groups like THE CRYSTALS, THE SHANGRI-LAS and Annette Funicello. Later, "Bad Boyfriend" speaks for itself, this time chiming more in line with Toni Basil with a tad more fang.

The teen beat feel of "Fire ASnd Gasoline" swirls about the stepped-down "BittersSweet", retrospective this time of the late eighties, where Lee Aaron struck the height of her career. Instead of serving up rock candy or pondering whatcha going to do to her svelte figure, Lee Aaron turns "Bitter Sweet" into a freewheeling anti-love song. The other quasi-ballad, "Heart Fix", is terrific and finds Lee Aaron summoning impressions of her idols, the Wilson sisters, from—where else? Like the rest of "Fire And Gasoline", these tunes are catchy and Lee Aaron's growth as a singer gleams all over them.

Aaron and Kelly drop subtle dashes of THE WHO into a sixties' bubblegum palette on the swinging "Popular". Later they swim amidst a groovy TOMMY JAMES AND THE SHONDELLS-dug ether on the lovesick "Nothing Says Everything". Hopping decades, "If You Don't Love Me Anymore" rides a Bob Seger verve and slavers honeyed choruses upon it. Lee wraps the album with a supposed partial autobiography on "Find The Love", which succeeds largely because of its honesty.

Depending on how you evaluate Lee Aaron's career as a whole, "Fire And Gasoline" is sanitized, yet classy. It's precisely the kind of album a devoted mother wants to leave to her family as one of the prouder parts of her legacy. Lee Aaron may have played the sex card to her advantage when it was subtly mandated a female performer should, but there's no need for that any longer. What we have with “"Fire And Gasoline" is hardly fire and brimstone. Those days are gone, and if you come to this album hoping for a "Metal Queen" resurrection after so long a layoff from rock, you're likely to pivot away. Instead, "Fire And Gasoline" is a tasteful, sometimes popping rock jaunt that shows Lee Aaron being twice the singer she was. Jazz has certainly turned a positive dime in her favor. Criticize her if you will, Lee's looking in the mirror and smiling anyway.