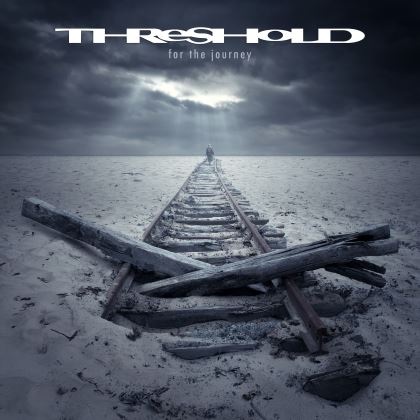 "…but this you know that the journey is good".

This proclamation found in the liner notes of THRESHOLD's latest album "For the Journey" is telling where this band is and where they've come from. A journey these guys have been on, and for them to take an upbeat stance following the death of longtime vocalist Andrew "Mac" McDermott in 2011 is as remarkable as their sound in 2014. Having brought original singer Damian Wilson back for 2012's "March of Progress", this year the prog metal veterans sound not so much renewed as determined to bid their final farewells and embrace their core of creative greatness. "For the Journey" is a healing stone not without its share of anguish and that's what makes it such a compelling listen.

As THRESHOLD has always had a knack for plugging more song than stuffing into their progressive metal pieces, "Watchtower on the Moon" is rock-out, not drag-out. Ringing instead like a power pop number versus a prog metal blaster, THRESHOLD kicks this album off with gleeful energy. Being as accomplished as this band is, "Watchtower on the Moon" is not all straightforward rock since the middle section is stocked with numerous progressions and solos, yet it all ebbs lithely while sticking to the primary groove. Only the choruses slow down, allowing Damian Wilson to lead gang vocals filled out by Karl Groom, Richard West and Steve Anderson. To a certain degree, there's an Eighties YES air about these choruses and those on the subsequent track, "Unforgiven".

As these songs deal with the topic of moving forward through adversity, the darker yet no less harmonious "Unforgiven" transmits the pain that still remains in this band. Yet there's stark beauty to this bloodletting that moves as busily as the arrangements designed to convey chaos and grief. Together, "Watchtower" and "Unforgiven" serve as platform for the 11:59 "The Box". Karl Groom and Richard West state the genesis of writing "The Box" comes from a place of personal loss yet the horrific soundbyte of the Soyuz 11/Salyut 1 cosmonaut tragedy at the end underscores the long-winding woe of the track. Richard West specifically notes there's an open-ended nuance about the song's theme, but "loosely, it's about when the modern world collides with the old world." Certainly there's something to be said in the way "The Box" fuses soulful choruses and escalating guitar and key scales that it comes from a void bigger than the rest of us, and twelve minutes is hardly enough time to test its boundaries, much less go deeper if one dares. The songwriting of "The Box" is sheer genius and it's guaranteed you will feel your heart yanked by the final series of sorrowful yet escalated synths.

Reverting back to a punching rhythm, hard riffs and melodious choruses on "Lost in Your Memory", THRESHOLD once more proves they can bust out a pure rocker with fluent transitions that never deviate from the main channel. Afterwards comes "Autumn Red", described by Richard West as "unofficially" the fourth section of a continuously-building suite, "The Uncertainty of Autumn", its tie-in predecessors being "Flags and Footprints", "Static" and "Hollow". The song is magnificent in the way it uses a Seventies pop base and goes one level higher with equally tight arrangements, thicker chords and soaring choruses, almost as if SURVIVOR and QUEEN jammed some parts together and left the trail for someone else to pick up.

It's a delight hearing THRESHOLD opting to not merely continue on as a band, but to make the most of the moment, or the journey, if you will. Johanne James' drumming is as crisp as Steve Anderson's snappy bass lines and Richard West's front-shoved, cyber-kissed keys. All of still gives Karl Groom and Steve Anderson room to breathe and Damian Wilson a canvas to bounce his delectable pipes from. Thus the recurrent drive of "For the Journey" is as much a pleasure to behold as the band's decorative talents.

This album has its share of heartbreak, but it also has renewed joy running in its favor. "For the Journey" is a frequently moving record (the breathtaking, borderline sobbing bridge on "The Mystery Show" being one of many emotive spots) and for any fools who have written THRESHOLD off as DREAM THEATER acolytes, let the proof be served against that claim. YES is more of a significant influence, but THRESHOLD continue to possess that rare ability to embellish with charisma instead of ostentatiousness while maintaining a true songwriter's acumen. In this case, the journey is not merely good; it's divine.