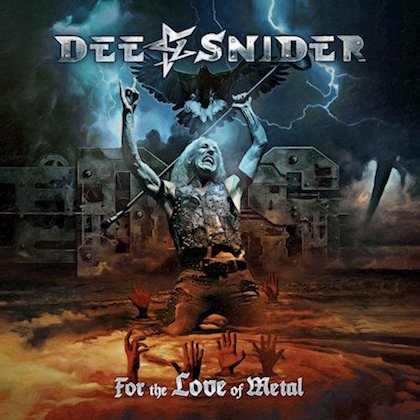 For The Love Of Metal

A House of Hair moment this is not. Officially retiring TWISTED SISTER from all activity following the passing of drummer A.J. Pero, Dee Snider answered a calling to perform new solo material. Enduring the further loss of his mother, Snider found a new habitat amongst a younger hardcore/metalcore community with which to voice his grief. Attending numerous hardcore shows with his daughter, Snider was treated like royalty by the new generation, leading him to HATEBREED's Jamey Jasta, who commandeers Snider's fourth solo record, "For The Love Of Metal".

If you're drowsy prior to hitting play on this album, the blasting double hammer of "Lies Are A Business" will jolt you awake—count on it. As one of the heaviest numbers Dee Snider's ever sung, this is a rip-snorting rocket with guitars roaring as loud as Dee himself, who drops caveats about the music business. The brother's always had no problem speaking his mind.

The sweaty pace carries into the mosh of "Tomorrow's No Concern" and Dee gruffs all over this contemporary metal masher. Ditto for the proto-core churns of "I Am The Hurricane", "Running Mazes" and "American Made", upon which he woofs convincingly as much as he wails. The latter anthem comes stuffed with raging gang chants, so let your wallet chains sing in time against your hip if you're so driven. Jamey Jasta was no doubt geeking at it all from behind the console. Bridging "Painkiller"-era JUDAS PRIEST to his own HATEBREED on the title track especially had to be a jeans-splooging moment.

Dee leads his power pack through the rally taunts of "We fucking despise you!" on the punchy "Roll Over You", and you can hear Dee laugh at his own vulgarity at song's end. He brings it, equipped to field the lyrical pain spooled within the roughneck tempo of "I'm Ready". "Become The Storm" is a well-balanced hybrid between throwback American power rock and modern huff metal. Dee Snider glides out of his scowls and delivers the trusty 'core credo of self-empowerment. "Become The Storm"'s towering choruses are so stellar, all age brackets can unite behind them.

The focal points of the album are the duets with Howard Jones on "The Hardest Way" and then with Alissa White-Gluz on "Dead Hearts (Love Thy Enemy)". This bridging of the generation gap works wonders, in particular with White-Gluz on a song so richly written and smartly layered the singers grasp a shared torch. Even Jones's soulful textures compliment Snider in ways no one else has in his illustrious past.

What's so remarkable is the fact that Dee Snider is able to imprint his old-school tones to songs written two generations after TWISTED SISTER last recorded new material. He is the quintessential chameleon here, making the necessary adjustments to bluster against the bruising music set before him. In many cases, an elder statesman sounds out of place looking to stay relevant amongst modern themes. Not so here. Dee Snider more than carries his weight and defines relevance on "For The Love of Metal".