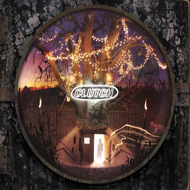 From Beale Street to Oblivion

Blame it on a steady diet of old blues and classic rock records, or on their friendship with jammy blues-rockers FIVE HORSE JOHNSON, but don't say you didn't see it coming. CLUTCH, the band who once came off like an off-kilter hardcore or noise-rock band, is now officially drenched in funky groove, warm washes of Hammond organ, sly and slippery bass lines and the kind of good 'n greasy guitar work that'd make a MOUNTAIN or URIAH HEEP fan stand up and cheer. They're not really stoner rock, or metal, or punk, or much of anything you can fit behind a record store bin card these days — they're just the most authentic, sweat-baptized, honest-to-god rock and roll band currently truckin' down the American interstate singing for its supper.

As one-two punches go, it doesn't get much better than the opening salvos on "From Beale Street to Oblivion". "You Can't Stop Progress" and "Power Player" are both hard-driving, infectious, instantly memorable jams with spirited vocals from madman Neil Fallon and some typically impressive drum work from Jean-Paul Gaster. These songs set the tone for "Beale Street" — the band just cooks, with a live revival-tent intensity and more goddamn groove than you can possibly stand without involuntarily bouncing up and down in your chair.

At the same time, there's almost a laid-back, poppy accessibility to a few of the songs that works just as well. "When Vegans Attack" (best song title ever) is a snappy number with a slick guitar hook, a killer chorus and a rock and roll lockstep right out of '70s radio. Contrast this with the deep blues throb of "Electric Worry" or the urgent HEEP-ed epic vibe of "White's Ferry" — there's a whole lot here, all these disparate elements organically growing out of that basic, damn near indefinable, uber-cool CLUTCH-ness that has evolved as the band has grown up, explored their roots, and played about nine million hours of live music together.

The great thing is, as badass as "Beale Street" is, it's not really a radical departure from the unprecedented arc the band's been on over their last several releases. They're doing things the way bands used to do them — they tour their asses off, go home and knock out another batch of songs while the ringing in their ears and roadside-diner heartburn is still fresh, then saddle up again. No three years of namby-pamby soul-searching, no focus groups or marketing plans, CLUTCH just takes care of business, and they're on one of the longest current winning streaks there is. Steeped in the blues, heavy as hell, clever and eccentric, CLUTCH are carrying the flame for real American rock and roll, dumb rock for smart people, road warriors of the highest order and master artisans of the riff and the turn of phrase. And it's the world's loss that they aren't the biggest band ever.