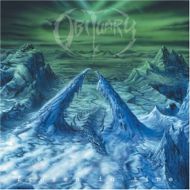 Certainly a contender for Most Appropriate Album Title of 2005… and why the hell not? If you heard anything from OBITUARY but inexorable groove, bone-basic riffs, and John Tardy's wounded-Yeti howl, wouldn't you be pissed off? These guys know what they (and we) like: big urns full of vintage CELTIC FROST half-buried in the Everglades and left to fester in the Florida sun. Eight years may have lapsed since the band's last proper studio album, but their killing instinct hasn't wavered, and their songwriting muse is still happily stuck in 1990.

The time off seems to have actually made them sharper, as "Frozen In Time" sticks to the ribs better than 1997's tepid "Back From the Dead". There are no real "hit singles" as on OBIE-slabs past (see: "Chopped In Half", "Back To One", "Don't Care"),just primal, from-the-gut riffs churning one after another from the speakers, in an organic flow. Rhythm guitar, bass and drums rumble along like a genial avalanche, crushing with warm midtempo groove, while John Tardy lays down just the right amount of his inimitable wet shriek.

"Redneck Stomp" raises eyebrows for its title alone, but happily it's just an instrumental intro, not some misguided effort to bring Blue-Collar Comedy to Florida death metal (hey, after that song with the rappers on it on "Back From the Dead", can you blame me for worrying?). "On the Floor" quickly thrashes its way into the classic OBIE canon, with an exuberant solo from Allen West, lurching slow chorus and echoing roar from Tardy. "Blindsided" and "Mindset" just smolder, lurching along with a groove (there's that word again!) deeper than the bags under guitarist Trevor Peres's eyes. "Stand Alone" ups the tempo a little, and retools FROST's "Circle of the Tyrants" riff — not surprising, since OBITUARY covered that very song on 1991 masterpiece "Cause of Death".

Sometimes saying a band has delivered a "give the people what they want" record is a negative thing. It's usually easy to smell the flop-sweat when a band is trying too hard. But OBITUARY have no such stench about them this time out — if anything, they make this shit look easy! They're clearly in a comfortable zone, happy to be in each other's company, now elder statesmen of a scene they helped put on the map.

My only complaints? At 34 minutes, I was left hanging, hoping for a couple more songs' worth of death crunge. And maybe one of those "hit singles" woulda put "Frozen in Time" firmly over the top into Top-10-of-2005 contention. For now, though, I'm willing to put songwriting on the back burner, happy in the knowledge that riffs this meaty and a vibe this old-school are not only still alive, but thriving. Long live OBITUARY!