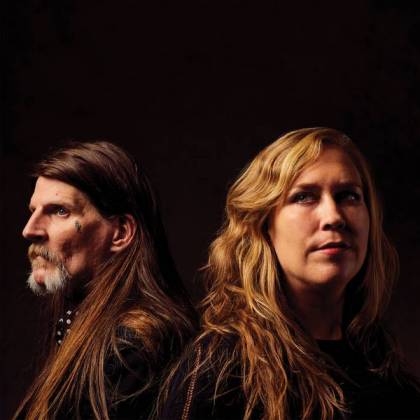 Full Upon Her Burning Lips

01. Datura's Crimson Veils
02. Exaltation of Larks
03. Cats on the Briar
04. The Colour of Poison
05. Descending Belladonna
06. She Rides an Air of Malevolence
07. Maidens Catafalque
08. An Unnatural Carousel
09. The Mandrake's Hymn
10. A Wretched Country of Dusk

While there's seemingly little in common on the surface, EARTH and SUNN O))) have both travelled a similar trajectory. Both iconic American doom metal acts began more strictly as distortion-driven drone bands, and they've subsequently branched out significantly into experimental terrain as they've matured. SUNN O))) has obviously always been inclined toward the dark arts, and for EARTH, the primarily instrumental band has embraced shades of country and folk with a clear appreciation and reflection of Americana. Running three decades strong, Dylan Carlson and company now return with their ninth offering: "Full Upon Her Burning Lips".

The Olympia, Washington-based band's most recent full-length was five years ago, the heavy metal tinged "Primitive and Deadly". With "Full Upon Her Burning Lips", EARTH has returned to its previous path, rendering "Primitive and Deadly" as a brief excursion, and sculpted sound that is as sprawling and open as a seemingly endless field. The sound is warm, organic and—ahem—earthy. It's the perfect soundtrack for introspection during a long drive or hike. And unlike "Primitive and Deadly", this time around there isn't a slew of star-studded vocal guest spots.

But that isn't to say that "Full Upon Her Burning Lips" is a conventional instrumental release. Even though the band is capable of meandering through bleak territory, it has proven for decades that it is equally profound and probably most inventive when sculpting sound that is utterly beautiful. Abundantly clear on a track like "She Rides an Air of Malevolence", "Full Upon Her Burning Lips" finds EARTH at its most elegant and profound. The music is given time to breathe and move naturally. The space between the notes is just as meaningful as the strumming and percussive strokes. The resonance and feedback build and swell with hypnotic effect.

There's a majestic appeal and experimental quality throughout the album. The ensemble doesn't go overboard with regard to the pretentious element, but it is there, for better or worse. And yet the band flexes its muscles when the music calls for desert rock thunder on songs like "Cats on the Briar" and "Datura's Crimson Veils". The dichotomy works because it flows together.

EARTH's music seems designed for exploration and pondering, a quest for understanding for both the band and listeners. But with "Full Upon Her Burning Lips", EARTH seems as confident as ever in that journey. The travel requires patience, yet the rewards are immediate. The downside is that the band's development over the years is as slow-crawling as its songs, but at least they're continuing to move in the right direction.