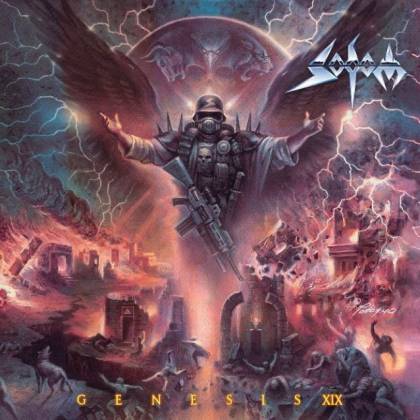 It's hard to believe that Germany's SODOM have been around for damn near 40 years. But the Teutonic thrashers are on top of their game with album number 16, the rabid and manic "Genesis XIX". Simply put, "Genesis XIX" is the act's best album in years. It's high-octane, to say the least, and the passion is simply overflowing. The songwriting as well is impressive and considerably more subtly nuanced that what we have heard from them before.

Founder and frontman Tom Angelripper marches forth with yet another lineup, one that is a quartet for the first time, on the recording front. This time around, the bassist/vocalist is accompanied by drummer Toni Merkel, rhythm guitarist Yorck Segatz, and lead guitarist Frank "Blackfire" Gosdzik. Blackfire was a part of SODOM during the late eighties when the band released its classic "Persecution Mania" and "Agent Orange" albums, prior to his departure and involvement with KREATOR. Angelripper and his cohorts have reportedly been continually jamming in a beat-up rehearsal space in Germany's rugged Altenessen/Essen municipalities. "I want guys from the Ruhr, who share my background, with whom I can work and rehearse consistently," Angelripper stated via a press release. The regularity of rehearsal sessions seemingly lent itself to the organic nature of the songs.

A dramatic instrumental, "Blind Superstition", introduces the album, leading into the barn-burner "Sodom & Gomorrah", a track that bursts with a fusion of filthy proto-black metal — a template they, in many ways, built with 1985's "In the Sign of Evil" EP and 1986's "Obsessed by Cruelty" LP — and punk. The epic, seven-minute-long title track begins majestically with the spirit of doom, an energy that later returns on "The Harponeer", before picking up to a steady riff-driven thrash attack. And the act's extensive period without having a song sung in German comes to an end with "Nicht Mehr Mein Land", a song that explodes with blasting death metal fury prior to sliding into a slow-paced groove pocket that carries itself until a blackened riff leads the way. Here, and throughout the album, Angelripper's blackened snarl sometimes morphs into a robust yell in the vein of Tom Araya.

SODOM has always been in forward motion, and the band has been as prolific as ever over the last few years. Sure, the act has occasionally drifted into monotony or blandness, but that's inevitable for a band that's been around for nearly four decades. For the most part, they've maintained a high standard throughout the majority of their career. With "Genesis XIX", SODOM has upped the ante, producing one of its most well-rounded albums, referencing and synthesizing the act's early exploration of evil black metal, its mid-career's jet-fueled thrash metal attack, and the more recent focus upon dynamic and developed songwriting. "Genesis XIX" is a winner because the urge to play it repeatedly is enduring.