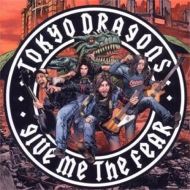 Give Me the Fear

Produced by the same guy who brought you THE DARKNESS, and already hyped to the rafters by the ever-fickle U.K. press, London denimboys TOKYO DRAGONS are yet another band pulling the mirrored shades, leather vests, and moustaches so ironic they hurt, all in the name of "real rock and roll". The thing these would-be saviors always forget is that a band comes along about every three months and says it's the one saving the otherwise-neglected corpse of rock music. If everyone who claimed to bring rock back actually did it, ACE FREHLEY would be President of the United States, THE HELLACOPTERS on Mount Rushmore, and CHEAP TRICK would be busily rewriting power chords into the national anthem.

Fans of pre-Mutt LangeDEF LEPPARD, scrappy three-chord hedonists like BAD WIZARD, cheap-beer-swilling AC/DC and LIZZY revivalists (LEADFOOT, RHINO BUCKET),and even those into BUCKCHERRY or L.A. GUNS will find much to love asout TOKYO DRAGONS. The singer's a bit poncy and off, but Joe Elliot and Justin Hawkins are living proof that that's never been a crime. There are isolated moments of guitar brilliance, too, some utterly infectious dual guitar runs that leaven the extreme cheese factor and novelty aspect of the band.

Problems? Well, some of these songs are just knuckle-dragging dumb, even by rock and roll standards (they'd have thrown "Do You Wanna?" off the ACE FREHLEY solo album for being too lyrically lame, and that's saying something). And while the album as a whole gives off a sort of warm, generalized pro-rock sentiment, the songs tend to run together into an amiable blur of clichés and swagger ("Come On Baby" comes closest to hit single potential, the Godzuki to AC/DC's Godzilla).

It's fun stuff, overall, and not really the kind of music that lends itself to strenuous dissection. If you "get" THE DARKNESS, or you wonder why bands like THE BLACK HALOS and DIRTY AMERICANS aren't going platinum and selling out arenas, you'll like TOKYO DRAGONS — it's that simple. They're pre-fab rock stars, prime riff recyclers, pants-stuffing prancers who, given the time and attention, could maybe save rock and roll after all, or at least give it a helluva wake.