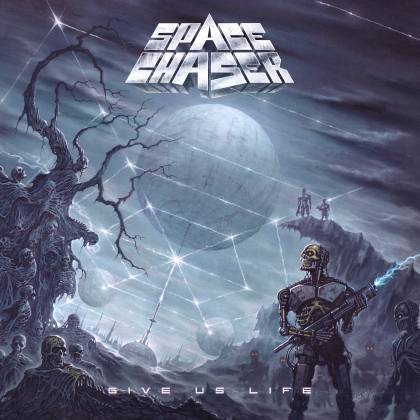 After two widely praised albums established them as a vicious new force in German thrash, SPACE CHASER are audibly well-equipped for their first big label full-length. METAL BLADE clearly know their stuff, and "Give Us Life" delivers the kind of no-nonsense, undiluted thrash assault that, for those sworn to the steel, is entirely irresistible. And that's before you notice frontman Siegfried Rudzynski world-class mullet.

There are many ways to approach thrash metal, from the defiantly old school to the maxed-out and modern. SPACE CHASER take the sensible approach of nailing the '80s-worshipping basics, but with a production that is all timely bite, pertinent punch and as timeless as the songs themselves. As an entry point, "Remnants of Technology" is magnificent: a furious, heads-down speed metal tirade, with welcome shades of AGENT STEEL and OVERKILL and a killer chorus. "Juggernaut" is even better, as the German's hammer away at mid-pace, a dash of ACCEPT in the mix and anthemic hooks fired at will. In contrast, "Cryoshock" takes a more progressive thrash route, as Rudzynski spits out some swivel-eyed, dystopian yarn, with pitch-perfect gang vocals punctuating his shrieks. Everything crackles with intensity.

The rest of "Give Us Life" is roughly divided between the brutal and direct ("A.O.A." , "Signals", the thuggish and ANTHRAX-like "Antidote to Order"),and the dark and destructive ("The Immortals", "Burn Them All"),with the title track's low-slung swagger and deathly menace proving an immediate standout. It's the closing "Dark Descent" that demonstrates SPACE CHASER's mastery of the form most vividly, however: six minutes of epic but gnarly thrash purity, it's plainly fueled by a genuine love and understanding of the genre in all its nefarious forms, while incorporating subtle elements of black and death metal along the way.

The year 2020 was an extraordinary one for thrash metal, and 2021 has been equally as impressive. "Give Us Life" does not attempt to reinvent or reimagine, but when it comes to hitting the musical bullseye and delivering the old-school goods, it does so with a power and passion that simply cannot be faked. File next to the likes of GAMA BOMB and EVIL INVADERS, as proper thrash, done properly, by Germans. What else could you possibly need?