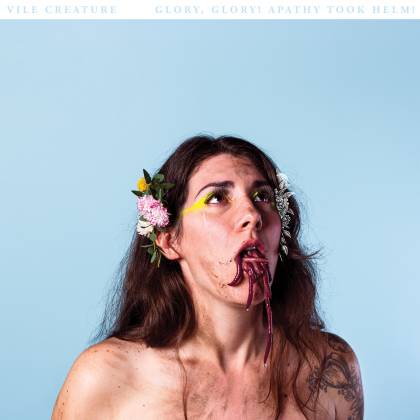 1. Harbinger of Nothing
2. When the Path is Unclear
3. You Who Has Never Slept
4. Glory Glory!
5. Apathy Took Helm!

The balancing act between artistic ambition and heavy riffs is a very precarious tightrope to walk. Dozens of bands use doom metal as a launching point for headier expression and grander exploration. Many of these musicians are competent enough at maintaining this balance, but very few ascend into a level deserving of the term, "greatness". VILE CREATURE's third record, titled "Glory, Glory! Apathy Took Helm!", sees the Canadian duo make a strong case for laying claim to that ascension.

VILE CREATURE does not waste time in asserting their mastery of heavy art. In the opening minutes of "Harbinger of Nothing" the duo of Vic (vocals/drums) and KW (vocals/guitars/percussion) trade-off ferocious paint-strippng caustic growls, backed by an equally immersive musical din to match. The level of sludge generated on this opening salvo matches the peaks of acts such as EYEHATEGOD, right down to the sickly rumble of KW's guitar performance. Vic also displays an impressive poise in the drummer's seat, guiding the slow-burning crawl of their doom metal lurch with a heavy hand that rains down hard on the skins.

The transition into "When The Path is Unclear" is slower-paced and moodier, though the duo still capably builds an ominous aura with their early instrumentation, and the duo's vocal approach remains intense. The early minimalism here builds to powerful doom riffs that maintain a steady hypnotic crunch while remaining coarse and abrasive. This and the opening track each run just a few seconds past the eleven-minute mark, but by the track's end, the duo asserts their ability to build an apocalyptic aura similar to genre masters such as NEUROSIS while avoiding acts of unnecessary meandering. The pace does pickup slightly during "You Who Has Never Slept", though the music still does not approach anything resembling a burst of speed. The track is a steady mid-tempo headbanger, while keeping the levels of ugliness and uncomfortable riffage established during the record's first half. The mix of powerful riffs and rumbling aura is evocative of "Celestial"-era ISIS, before that band sailed into more prog-laden waters.

The only respite from VILE CREATURE's ugly rumble comes on "Glory Glory!" Guest vocalist Laurel Minnes and her choir, MINISCULE, provide a moment of beauty via a six-minute operatic interlude, backed by strummed guitar and organ accompaniment that suggests the ominous calm that occurs in a spaghetti western flick before what is sure to be the bloody and violently climactic gunfight. And the beauty does indeed give way to apocalyptic doom metal on "Apathy Took Helm!" , as Vic and KW return with their harsh vocals and harsher din, with the operatic chorus now poking through the murk in a ghostly call-and-response manner.

VILE CREATURE stakes a strong claim for 2020's best doom metal record with "Glory, Glory! Apathy Took Helm!" The genre does not have too many places left to go in terms of musical exploration, but the Canadian duo does an excellent job of mastering the well-worn sounds of the genre while finding a few new forks on the established road.