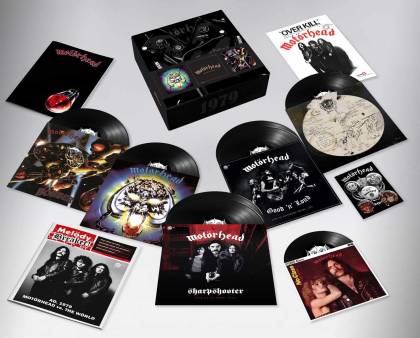 An inevitable step after the death of a beloved musician such as Lemmy Kilmister is the posthumous release of products pitched with the promise of paying tribute to that musician's legacy, many of which are cynical cash grabs that are essentially the music version of Malibu Stacy getting a new hat. Luckily for MOTÖRHEAD fans, the new vinyl box set, simply titled "1979", is the complete opposite of that. It is an impressive package that was obviously put together with love, reverence and many hours of care.

Yes, the set does include new masters of the group's seminal 1979 records, "Overkill" and "Bomber", as well as B-sides and alternate versions that have been contained on previous reissues. Both albums remain timeless classics and continue to showcase why the argument can be made for MOTÖRHEAD being the first crossover band that was fast enough for the punk rock kids and heavy enough for the metal kids, thanks to fan favorite tracks such as "Stay Clean" and "Damage Case". The new masters sound great sonically, to the point that every breath Kilmister takes after emitting his gravelly vocals is audible, and every bass line rumbles loudly.

The true impetus for the longtime MOTÖRHEAD fan to look into the "1979" set — and the moments where the hefty price tag earns its value — is the treasure trove of archival live performances contained herein. As heavy as MOTÖRHEAD came off on their recorded output, it was the raw power of their live performances that pushed them to their legendary status and earned lifetime fandom from its followers. There are two complete — and previously unreleased — performances contained on the "1979" set, both of them recorded within a week of the respective releases of "Overkill" and "Bomber". The untamed energy of the 1979 lineup of Kilmister (bass/vocals),Fast Eddie Clarke (guitars) and Philthy Animal (drums) is immediately evident on these performances. MOTÖRHEAD had not been established as bona fide legends just yet but took to the stage on these nights as if they had already been anointed.

A March 1979 set recorded in Aylesbury, Buckinghamshire, England — titled here as "Good N'Loud" — features a rendition of "Capricorn" that is sinister and stripped-down and a performance of "Iron Horse/Born To Lose" that is covered in dirt. MOTÖRHEAD's cover of blues standard "Train Kept A-Rollin'" has never sounded heavier thanks to Clarke delivering a guitar performance that is overloaded with fuzz and shred. The soundboard recording of a November 1979 performance recorded in Le Mans, France — given the title "Sharpshooter" — is a bit more blasted-out and distorted in terms of sound quality, but is still worth doing a deep-dive listen if only for another infectious display of Kilmister's between-song banter, and several songs such as "No Class" come off with an extra coat of heaviness from that distortion.

Equally as immersive as the archival performances is the reading material contained within the box set. A 40-page replica magazine — mocked up to look like an era-appropriate issue of "Melody Maker" — contains recollections of the band's rise to fame and tales of their debauchery during that era from journalists, band acquaintances and fellow musicians such as Peter Hook (JOY DIVISION/NEW ORDER) and Kim McAuliffe (GIRLSCHOOL),alongside replica ads — both real and satirical. The amount of effort given to the painstaking visual detail of this is almost as engaging as the stories themselves, and along with a replica tour program/photo book, is a great way to kill the time while indulging in the live performances.

If the effort put into the "1979" set is going to be indicative of the approach taken with handling MOTÖRHEAD's legacy moving forward on future projects, there is no reason the legend of the band can't endure for at least another forty years.