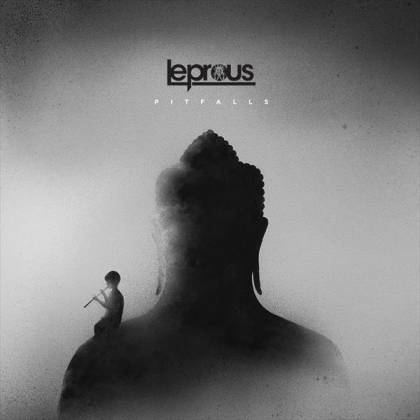 You may already have read a few critics expressing surprise or dismay at the fact that LEPROUS seem to have completely abandoned any pretense toward being a metal band at this stage in their flourishing career. Just as it was with OPETH and their not-remotely-unexpected evolution away from death metal, you have to wonder what these people are smoking. Resolutely progressive from the very start, the Norwegians may have fooled a few people into thinking that they could straddle both metal and prog long term — helped by an enduring association with Ihsahn — but even a cursory listen to their last few albums should have been sufficient warning that an album as wildly idiosyncratic and fervently non-metallic as "Pitfalls" was inevitable. Come on, folks. Do pay attention.

Produced by frontman Einar Solberg and esteemed studio guru Dave Castillo, LEPROUS's sixth studio album has plenty of heavy moments, but we are now firmly in fearless, experimental art rock territory now: Solberg's artful melodies finding new homes among throbbing post-punk disco ("I Lose Hope"),an elegant chamber pop waltz with echoes of ELBOW and RADIOHEAD ("Observe The Train") and even thunderous, churning industrial rock ("At The Bottom"). First single and opening track "Below" will already have reduced a lot of people to grateful tears. It's just one of those gloriously overwrought anthems that LEPROUS have made a habit over the years. Here Solberg plugs directly into the anxiety mainframe, his tender howl an irresistible plea for peace and clemency.

One of the great revelations here is that LEPROUS have mastered the art of calm as a weapon of dynamic destruction: "Distant Bells" begins as blissfully fragile thing, all reverbed pianos and keening drones, before ingeniously mutating into unbearably tense, skittering post-rock and an explosive, fists-in-the-air melodic crescendo. Even if it were possible to resist this band's tunes, the sheer invention on display should be more than enough to make this their most successful record yet. But then LEPROUS pull out an immaculate, rumbling four-minute earworm like "Foreigner" and it's clear that "Pitfalls" has many ways to win your heart, not least the feverish prog worship of closer "The Sky Is Red". The song is 11 minutes of high-tension groove, surging Mellotrons, clanging art-punk guitars and disorientating swerves into echoey minimalism. It's a lot to take in, but it's all executed with such conviction and class that persisting with the album's more abstruse detours will be more pleasure than chore.

So yeah, there's no need to panic: other, less adventurous rock bands are available. Or you could just embrace the sound of progress and have your mind blown.