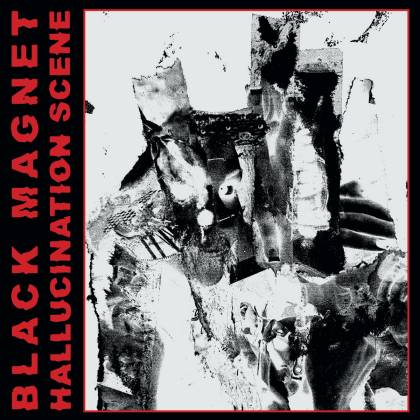 As sensible people will be well aware, there are few things more gloriously crushing and brutal than the sound of GODFLESH's "Streetcleaner" album cranked to the maximum. The industrial scene's close relationship with extreme metal has endured several decades at this point, but in the 30 years since that landmark album, very few bands have come close to equaling that sublime collision between man and machine. This year, however, there are at least two superb examples of flagrant and admirable GODFLESH worship on offer. Check out the new REALIZE album, if you haven't yet had the pleasure, but first head straight to this utterly vicious and untamed 26-minute robo-grind riot. BLACK MAGNET at least appear to be a one-man wrecking crew from Oklahoma City, which means that one person is making all this noise. Maybe things are as bleak in Oklahoma as they were in the British Midlands in the late '80s: either way, the thick, unforgiving atmosphere and sheer mechanized savagery that BLACK MAGNET are peddling is every bit as convincing and hypnotic as its most obvious, righteous influence.

This is a simply ferocious statement of intent, with all the snottiness and sense of psychotic momentum that can make industrial metal so instantly invigorating. Opener "Divination Equipment" is the sound of doors being kicked open and blood hitting concrete: two minutes of hostile electro-sludge churn, fueled by some unseen, unholy power source. "Anubis" is a moodier affair, driven by four-to-the floor menace and full of stabbing guitar samples and white-knuckle distortion. "Punishment Map" is an exercise in pure, vein-popping brutality, with shades of UNIFORM and ALEC EMPIRE and a lobotomized punk rock gait, it offers 94 of this year's most exciting sonic seconds. It may also make you want to drive your car through a wall, so be careful out there. At a slower clip, "Neuroprophet" veers into woozy, psychedelic hate-gaze, its shadowy creator's disembodied yelps echoing into a barren, pixelated cosmos; "Trustfucker" is all slow-motion hip-hop pummel and eerie ambient asides. "Crush Me" is an up-tempo assault with some wickedly satisfying low-end grind going on; "Hegemon" takes the dancing-in-treacle digi-funk route; closer "Walking In The Dark" is an opaque, dissonant nightmare set to a repetitive bleep, ticking down to some unnamed but looming apocalypse.

Inspired by the mecha-metal greats but brimming with warped ideas of its own, "Hallucination Scene" confirms that being crushed by the wheels of industry is still a unique thrill.